At one time, Oregon had more ghost towns than any other state. Check out Hardman, Sumpter, and Shaniko. (Texas has the most as of 2018).

In Oregon, it is illegal to use canned corn as fish bait.

The state of Oregon has one city named Sisters and another called Brothers. Sisters got its name from a nearby trio of peaks in the Cascade Mountains known as the Three Sisters. Brothers were named as a counterpart to Sisters.

Oregon and New Jersey are the only states without self-serve gas stations. According to Oregon state law, an attendant must pump your gas.

Eugene was the first city to have one-way streets.

The Oregon Trail is the longest of the overland routes used in the westward expansion of the United States.  The Trail used from 1840 to 1860 began in Missouri and ended in Oregon. It was about 2,000 miles long.

It is against the law in Myrtle Creek to box with a kangaroo.

In 1905 the largest log cabin in the world was built in Portland to honor the Lewis and Clark expedition.

In 1880 a sea cave was discovered near what is now known as Florence. Sea Lion Caves was listed as the largest sea cave in the world until New Zealand beat it out in 2012.

The Nike “swoosh” logo was designed by Portland State University student Carolyn Davidson in 1971 — several years after business undergrad Phil Knight and track coach Bill Bowerman founded the company they originally called Blue Ribbon Sports. Knight had rejected several of Davidson’s designs, and when picking the swoosh, said he didn’t love it, but that maybe it would grow on him.  Ms. Davidson was paid $35 dollars for her design. In the 1980’s, Davidson would be given a more proper credit through stock in Nike.

In Beaverton, Oregon, you are required to buy a $10 permit before installing a burglar alarm.

Crater Lake is the deepest lake in the United States. It was formed more than 6,500 years ago. Its crystal-blue waters are world renowned.

Discovered in 1874 the caves located in Oregon Caves National Monument are carved within solid marble.

The Carousel Museum contains the world’s largest and most comprehensive collection of carousel horses. 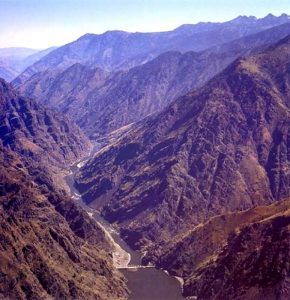 At 8,000 feet deep Hells Canyon is the deepest river gorge in North America.

Deadman Creek in Wallowa County was named by James Dale, a sheepherder who said he might just as well be dead as to be in such a lonesome place (1890).

Up until the 1970s, it was illegal to show movies or attend car races on Sundays in Eugene, Oregon.

At 11,239 feet Mount Hood, a dormant volcano, stands as the tallest peak in Oregon.

Oregon has no sales, restaurant or liquor tax.

In Marion, ministers are forbidden from eating garlic or onions before delivering a sermon.

Whorehouse Meadows in Harney County was exactly that during the days of the Old West. Setting up facilities under a canvas tent in the secluded meadow about a mile east of Fish Lake they would then meet up with cattle and sheep herders. In the 1960’s the Bureau of Land Management issued a recreation map renaming the meadow, “Naughty Girl Meadows” But in 1971 the Oregon Geographic Names Board took strong objection to the change and brought their argument before federal arbiters. After ten years the old name was restored in 1981.

In Stanfield, Oregon, no more than two people are allowed to share a single drink. 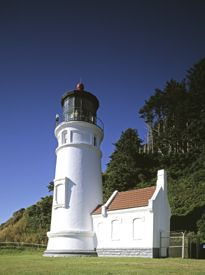 There are nine lighthouses standing along the Oregon coastline. Five are still being used; the others are designated as historic monuments. The nation’s most photographed lighthouse is the Heceta Head Lighthouse located in Lane County.

In Bend, Oregon is a Bowling Ball Garden at a place called the Funny Farm, where you can actually buy bowling ball seeds in the gift shop. Lots of other odd things here such as an electric kaleidoscope which continuously shows the Wizard of Oz in cascading psychedelic images, a Tire Totem Pole, and the Dead Halloween Mask Burial Grounds

The Tillamook Rock Lighthouse, built in 1880, is currently used as the site of the final resting place of up to 467,000 cremated individuals.

Oregon’s state flag pictures a beaver on its reverse side. It is the only state flag to carry two separate designs.

In Portland, people are banned from whistling underwater.