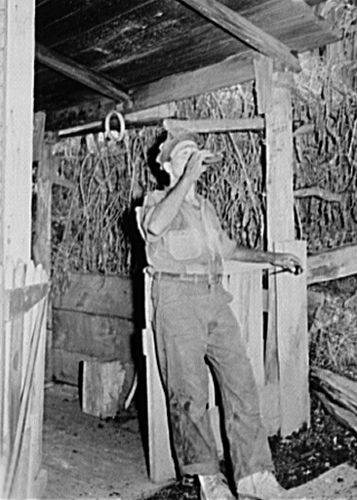 “Old Tom” was a character that lived in Eastern Nevada. He had drifted from one camp to another and located finally on the line of the Overland Railroad. It doesn’t matter where, for every camp has a character of a similar kind, hence his identity is a matter of no moment, and, in fact, as Hank Knight would say, it is entirely “immaculate.” It was about sunrise when Tom sat up in his bunk in the cabin he had occupied alone for many months, long enough to be registered several times and known as a voter and resident of the second ward. Tom yawned and rubbed his rheumy eyes and blinked at the sunlight coming through the cracks between the boards of his cabin, ran his fingers through his hair, and wound up the yawn with a “y-a-u-g-h” and a grimace that indicated a bad stomach. He had sat around a card game the night before in a back room of the Fashion Saloon and was rewarded for being a general nuisance by frequent drinks mixed with design to put him to sleep and thus get rid of him. Tom had awakened early because he felt bad.

It was a sort of yearning after the unattainable, but in Tom’s vernacular his “coppers were hot;” and in his philosophy, “the hair of the dog was good for the bite,” and hence he wasn’t long in deciding that he wanted a drink. So, he threw aside the blanket, ran his fingers through his hair again, picked his slouch hat from the floor, placed it on his head askew, gave another yawn, and his toilet was complete, for he hadn’t lost any clothes when he went to bed. He stepped out of the cabin and looked wistfully down the street. The doors of the Pony Saloon were open and Tom knew that Ned was on deck cleaning up the bar. Tom’s credit there was nil, and he knew it, and hence he moved slowly toward it. Reaching the door, he stepped in with the confidence of a cattle baron, but turned at once and looked up the street as if waiting for a friend. Then sauntering to the front end of the bar, he leaned over on one elbow and watched Ned breaking the ice into bits for convenient use.

“Mornin’ Ned,” said Tom, with a hopeless look of apology for disturbing the leader of ward politics, for Ned had the reputation of carrying the sack at important elections. Ned gave a muffled grunt, that indicated ill-humor, and kept on breaking the ice. Tom watched wistfully awhile, and then changing position and leaning on the other elbow ventured to speak and said, “There’s lots of them Grand Army fellers goin’ by every day now to the Bay.” Ned said nothing. Tom was encouraged by his silence and continued, “They ain’t no better ‘n eny body. They tell about fightin, but sho; they didn’t do eny more I’d a done. I didn’t git to fight eny, but it was jest the same.”

“Oh! what are you giving me? You wasn’t in the war,” said Ned, as he began filling a bottle from a demijohn tipped over his shoulder. “Well, I tell you.” said Tom, drawing closer to catch a sniff of the liquor gurgling from the demijohn; “well, it was all the same. I went out to camp when Colonel Connor was recruitin’ his regimen’ at Stockton. He warn’t no Ginral then. He was the boss of the waterworks there, an’ folks jist called him Pat Connor; everybody know’d him; he was jist ez common ez an old shoe then; but a military lookin feller en walked straight like he did when he wuz made Ginral.” 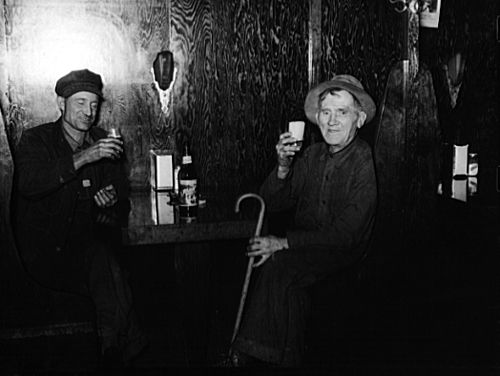 Drinking in a saloon, John Vachon

Ned was wiping off the bottle and didn’t seem quite so cross, and Tom moved along the bar to keep near him, and continued: “Well, I went out to camp to see my ole chum, wot listed about a month before; en he wuz on guard en hed me stay ‘long with him, and ordered ’em to serve me with some rations, en I et supper with him, en had jist same az he hed; corn pork, little fat it wuz-yis, purty fat, en I didn’t keer much fur it; en good strong coffee-wish I hed some now-in a tin cup, en plenty of sugar, but no milk; no sir, not a durn bit, not even eny condinsed milk, en some hardtack; that wuz all. En then he put me in the guardhouse fur all nite, coz sum o’ them green soljers wuz likely as not to shoot ef a feller got over the line. Well, in the mornin I asked my chum afore breakfus ef I could go into town about a mile away, en he sed ves en kind o’ smiled, en I started, en I went purty quick. En so I didn’t do eny fitin; but I wus in the war all the same, en–”

“Oh! here, ” said Ned, “take a drink,” and he pushed a glass out with about three fingers of straight whisky. Tom grasped it and raised it to his lips, when he noticed Ned’s smirk of incredulity, and he said: “Fact, Ned; en thers an agent writin to me from Washington, en he sez he kin git me a pension ef I’ll swear to the papers. Here’s luck, Ned,” and Tom swallowed it and made way for two cash customers, while Ned said: “Well, I’ll be blowed.”

About the Author: Written by William Daugherty, for the Reno Evening Gazette in 1891. The Reno Evening Gazette was first published on October 12, 1876, and continued for the next 107 years. In 1977, it was merged with the Nevada State Journal and continues to exist today as the Reno Gazette-Journal. Note: The article is not verbatim minor grammatical changes, and editing have occurred for the ease of the modern reader.