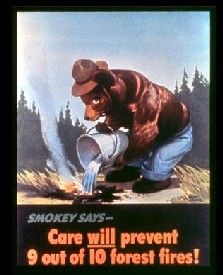 1944 Smokey Bear Poster, this and below photo courtesy Smokeybear.com

Though the Smokey Bear campaign began August 9, 1944, the bear itself was nothing more than an image born of artists’ imaginations when he first appeared on postcards, posters, and advertisements, cautioning “Only you can prevent forest fires.”

However, in 1950 a real baby bear became the live “Smokey” when he was rescued from certain death by firefighters in a devastating blaze in New Mexico’s Lincoln National Forest.

As these brave men fought the blazing inferno driven by strong winds, a report came in of a lonely bear cub, who had been seen wandering near the fire line. However, the firefighters were busy trying to contain the fire and sure that its mother would come for him, they left the baby alone.

When the man-made blaze was finally under control, it had burned over 18,000 acres, but amazingly the little cub had survived and was found clinging to a charred tree. With badly damaged paws and hind legs, he was rescued by the firefighters before the men began to search for its mother in the blackened and bare remains of the forest. However, finding no sign of the mother, they had to assume she had lost her life in the fire. The bear was christened “Hotfoot” and taken to Santa Fe for treatment.

In no time, the news about the little bear spread throughout New Mexico and was soon picked up by the nationwide press. As the country followed the cub’s progress, he was rechristened Smokey Bear and came to personify the advertising character created during World War II.

Smokey was then moved to Washington, DC, where he took up residence at the National Zoo, becoming so popular that he soon had his own zip code.

Two years after his rescue, in 1952, Steve Nelson and Jack Rollins wrote the song “Smokey the Bear” that would cause confusion about Smokey’s actual name.  In order to maintain the correct rhythm, the writers added a “the” between “Smokey” and “Bear.”  Before long, the bear became known as “Smokey The Bear;” however, his name is and always has been “Smokey Bear.” 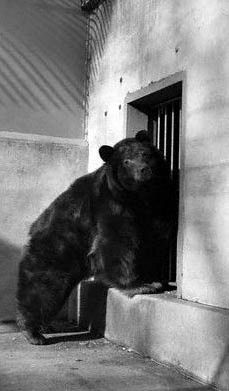 The real Smokey when he was housed at the Washington D.C. National Zoo

After receiving millions of visitors Smokey died in 1976, and though another rescued cub took his place, he never found the fame of the original Smokey. After his death, the bear was returned to its home in the Lincoln National Forest, where he was buried without fanfare.

In the meantime, however, the Smokey’s Museum opened in Capitan, New Mexico in 1961. The museum, housed in a rustic one-room building is filled with Smokey memorabilia, photos, and posters that chronicle the history of Smokey Bear and his message to prevent forest fires. Also available in the museum gift shop are all kinds of Smokey souvenirs. 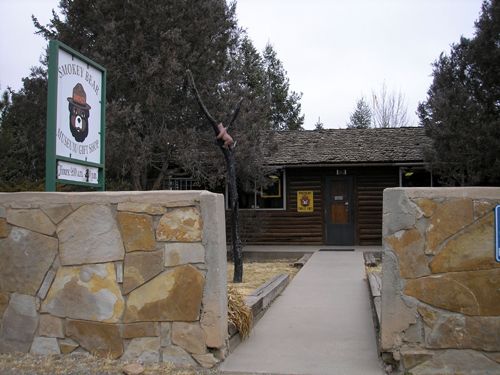 A view of the entrance to the Smokey Bear Museum and Gift Shop, February 2008

Nearby, the Smokey Bear Historical Park was established in 1979, to commemorate the dead cub. Now commemorated with a headstone, the park is home to Smokey’s grave, as well as exhibits about forest health, forest fires, wildland issues, an outdoor amphitheater, playground, picnic area, and the town’s original train depot.

The Smokey Bear campaign is the longest-running public service campaign in U.S. history, with its forest fire prevention message for more than 50 years. Created in 1944, it remained unchanged until April 2001, when the Ad Council updated his message to address the increasing number of wildfires in the nation’s wildlands.