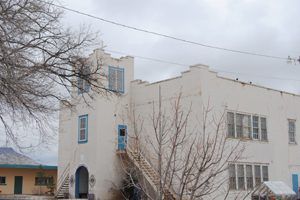 Unlike the other small towns along this stretch, San Fidel is not a ghost town, as it boasts about 135 people and still has a post office. In the old days, there were a number of cafes and automobile services in this fading town. Today, it still supports a mechanics garage, the church, a school, and an art gallery/gift shop. Back in the heydays of Route 66, it was not at all uncommon to see Indians sitting along the roadway selling pottery in addition to having numerous open businesses

One humble building in the community, that few people would even notice today, was once a popular stop for travelers and is on the National Register of Historic Places today. The Acoma Curio Shop was built by Abdoo Fidel, an immigrant from Lebanon in 1916 of adobe bricks. But unlike so many other adobe buildings in the Southwest, it also features a false front more common to mining boomtowns, making it a very rare blend of two distinct architectural styles. While such blending is common in roadside vernacular architecture, this particular combination is quite unusual, especially in New Mexico, and adds to the appeal of what is one of the few rural curio shops remaining along Route 66 in the state. A metal-roofed porch faces the highway, supported by four simple wooden posts. The north and west sides are neatly coated in white stucco, while the eastern wall is mostly of exposed adobes, showcasing the original construction. 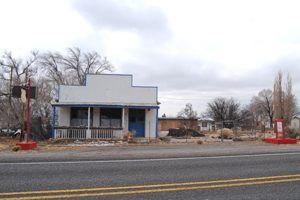 Fidel originally opened a small mercantile business in the building and later moved to a larger building on the west side of town that housed both his store and his family. The highway through San Fidel became part of Route 66 when it was commissioned in 1926, and traffic increased significantly in the coming years. Perhaps sensing an opportunity to capture tourist dollars, Fidel began wholesaling local Native American crafts, and in 1937 moved this operation into the original mercantile building, where he opened a retail business named the Acoma Curio Shop. Unlike most curio shops in the Southwest, which tended to feature a hodgepodge of crafts from different pueblos or cultures that were sometimes of dubious authenticity, Fidel dealt exclusively with local Acoma artists. 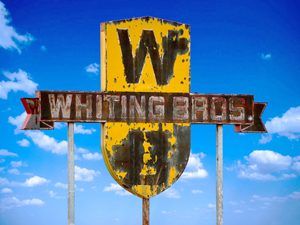 World War II and its accompanying gasoline rationing curtailed travel along the highway, and the Curio Shop closed shortly after America’s entry into the conflict. Fidel refocused his attention on his larger mercantile store, leasing the Curio Shop to the Standard Oil Company, which operated it as a service station for several years. Afterward, the building was called home to multiple tenants. While the building has undergone minor alterations, it has maintained a high degree of its historic integrity and was added to the National Register of Historic Places in 2009. Today, like so many other old business buildings in San Fidel it sits silent and empty.

Continue west on NM-124 about 2.5 miles for a view of a once busy Whiting Brothers complex which included a motel, gas station, and grocery store. Probably built in the 1940s, it might have been the place mentioned by Jack Rittenhouse in his A Guide Book to Highway 66, written in 1946: “Chief’s Rancho Cafe here, with gas, grocery, curios and cafe” two miles west of San Fidel.

Of the motel and grocery store, nothing remains but pavement and debris. abandoned long ago due to fire damage, the old gas station remains. Where the motel once stood is nothing but a  However, its majestic sign continues to stand. 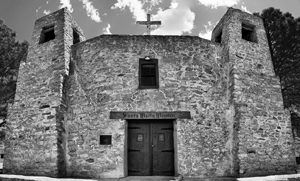 Just a few more miles beyond the old Whiting Brothers Station brings the Route 66 traveler to the edge of McCartys as the Mother Road passes to the north and west of the settlement. However, when Atchison, Topeka & Santa Fe Railroad came through in the 1880s, it was named McCarty for a railroad contractor who had his camp here. A post office was established in 1887 that continued to operate until 1911. There are many remnants of the historical past in this quiet little town. In the early days of Route 66, women and children, dressed in traditional Pueblo costumes could be seen in abundance seated underbrush shelters selling baskets and Acoma pottery.

What can be seen from the road today is primarily a collection of small homes and ruins as well as the beautiful Santa Maria Mission just west of the village. The beautiful Santa Maria de Acoma Mission, sitting up on the hillside was dedicated on November 28, 1933, by Archbishop Gerken of Santa Fe. A parish hall was constructed there in 1969. The simple stone building was constructed in the Spanish Colonial style, in a one half-size replica of the ancient church of old Acoma. Its interior provides views of several wood carvings that are notable works of art.

McCartys is the gateway to the Acoma Pueblo, some 13 miles to the southeast on BIA-38. Be aware that the pueblo provides entry only between March and October by guided tours which are about 1 1/2 hours long, There is a fee for the tour and no cameras are allowed without the purchase of an additional license per camera.

From here, old Route 66 can be traveled along a historic route to Grants, some 14 miles ahead.

Originally aligned along the National Old Trails Highway, this old section of historic pavement has been placed on the National Register of Historic Places and you will see why when you travel this vintage ribbon of the road. All along the journey, you will see black masses of hardened lava on both sides of the road. These great lava flows ranging from 50 to 200 feet wide, curve about the flat valley all along the route. This lava flow, called “The Malpais,” meaning “Evil Country,” is one of the most recent in U.S. history, occurring between 1,000 and 2,000 years ago. Navaho legend says that this lava is the blood of the great giant who was slain by the Twin War Gods in the Zuñi Mountains. Here in this area lies the remains of deserted pueblos, caves of perpetual ice, hideouts of Old West outlaws, and numerous tales of buried treasure.

The road-building was an engineering challenge when it was built crossing the basaltic flows of the Malpais badlands. New Deal programs during the Great Depression improved the road and paved it between 1935 and 1936. A steel pony truss bridge was built in 1936 across the San Jose River