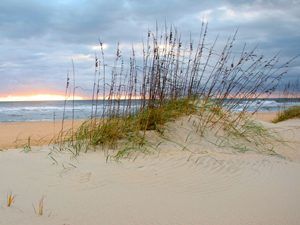 The nation’s first national seashore, Cape Hatteras National Seashore was established in 1937 to preserve significant segments of unspoiled barrier islands along North Carolina’s stretch of the Atlantic Coast. Barrier islands are narrow, low-lying land forms which parallel ocean coasts, are separated from the mainland, and are constantly moving and reshaping in response to storms, ocean currents, sea-level changes, and wind.

A haven for recreation and relaxation, the seashore, rich in cultural and natural diversity, also draws scientists from many different disciplines, including meteorologists, geologists, oceanographers, biologists, and more.

Over the years, the islands that make up the seashore have been home to Native Americans, farmers, fishermen, slaves, lighthouse keepers, and many others who continue to shape the heritage of the area. Through the centuries, these folks have witnessed hurricanes, the death of Blackbeard the pirate, Civil War battles, the construction of its now-famous lighthouses, u-boat attacks, and much more. Today, history lives on in the determination of the area people, the culture, its places, and stories. 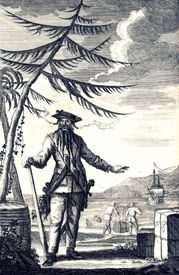 Edward Teach was better known as the infamous pirate, Blackbeard.

Historians estimate that Hatteras Island was first inhabited by small Native American tribes who were sustained by game, shellfish, and seafood in about 500 AD. Located miles offshore, these natives lived peacefully for more than 1,000 years without the threat of invading tribes. They were also fortunate that they didn’t have to suffer through harsh winters or dwindling food supplies that many mainland native communities.

The island was one of the first regions “discovered” by New World explorers. In 1524 Spanish explorer Giovanni Da Verrazzano landed on the North Carolina coastline, most likely somewhere in between Hatteras Island and Cape Lookout, where he was met by friendly natives. It would be decades before the people of the area would see Europeans again. The island first appeared on an English Map in 1585 as “Hatterask” named for the Hatteras tribe who lived on the barrier island.

In 1587 Captain John White, the leader of one of the first new English settlements, landed on Hatteras Island before heading north and settling on Roanoke Island. The change in course may have been fatal for the 116 colonists who would inevitably disappear to become known as the “Lost Colony.” Though their fate remains unknown, some historians believe that the colonists moved south to Hatteras Island to escape hostile Roanoke Island tribes. This theory is supported by documentation written in the 1700s of unusual “blue-eyed” natives found on the island, as well as a 16th Century English ring which was found in Buxton in the 1990s. The Outer Banks were first settled by English colonial settlers in the 1700s and maintained a small local population that depended on commercial fishing, hunting, the lumber trade, and sustenance farming. Many of these first settlers still have descendants living on the islands today.

It was during the 18th century that shipwrecks became prevalent along the dangerous Diamond Shoals as coastal North Carolina because of a popular trade route for mariners. In 1794 the newly formed US Government approved the building of a lighthouse on Hatteras Island to help mariners pass through the region with ease. However, construction did not begin until 1799. It was finally lit in October 1803. Made of sandstone, it was 90 feet tall with a lamp powered by whale oil. Unfortunately for ships traveling in the area, the light proved to be unreliable and not visible for most offshore mariners because it was too short, the unpainted sandstone blended in with the background, and the signal was not strong enough to reach mariners. In the end, the structure was deemed a failure.

By 1850, the island was called home to about 1000 people, with the majority living in the village of Buxton. In 1853, following studies made by the Lighthouse Board, it was decided to add 60 feet to the height of the Hatteras lighthouse, thereby, making the tower 150 feet tall. The newly extended tower was then painted red on top of white making the lighthouse more recognizable during the day. At the same time, the tower was retrofitted with a first-order Fresnel lens, which used refraction as well as a reflection to channel the light, resulting in a stronger beam. 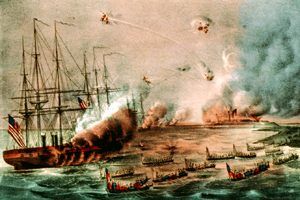 Less than a decade later the Outer Banks would be immersed in the Civil War. Hatteras Island began the Civil War as a Confederate island, but it was quickly taken over by Union forces in the Battle of Hatteras Inlet in August 1861. Six months later in February 1862, the Confederates lost control of Roanoke Island. Under Union authority, the island became a safe haven for freed and runaway slaves.

By the time the war was over the Hatteras Light needed extensive repairs and Congress appropriated funds for a new lighthouse. Construction began in October 1868. Two years later on December 1, 1870, the lighthouse, a conical brick structure rising from an octagon-shaped brick and granite base, was lit. It is the tallest brick lighthouse in the United States, measuring 198.49 feet from the bottom of the foundation to the top of the pinnacle of the tower. This height was needed to extend the range of the light beam from the tower’s low-lying beach site. The Fresnel lens installed was powered by kerosene and could be seen approximately 16 miles from the shore. The next year the old 1803 lighthouse was demolished in February 1871.

During this time the ocean waters off of Hatteras Island were among the most traveled, and the most dangerous for coastal mariners, due to the infamous Diamond Shoals. The US government was forced to step in after dozens, if not hundreds of shipwrecks, were recorded in the region within a few decades’ time. In the 1870s, US Lifesaving Stations, which were manned by some of the most decorated Lifesaving Service crew members were established throughout the Outer Banks to perform ocean rescues and assist shipwrecks in need. That service would be re-established as the US Coast Guard in 1915. Today, Coast Guard stations on Hatteras Island include the Chicamacomico Lifesaving Station in Rodanthe, the Pea Island Station near Oregon Inlet, Kinnakeet Station in Avon, and Little Kinnakeet Station just north of Avon.

In the early part of the 20th century, wealthy visitors started to visit Hatteras Island for fishing and hunting activities, resulting in several hunt clubs being established and giving a start to all kinds of tourist activities and services.

Before bridges were built in the 1930s, the only form of transport between or off the islands was by boat, which allowed for the islands to stay isolated from much of the rest of the mainland. This helped to preserve the maritime culture and the distinctive Outer Banks accent or brogue, which sounds more like an English accent than it does an American accent. Many “bankers” have often been mistaken for being from England or Ireland when traveling to areas outside of the Outer Banks. The brogue is most distinctive the further south one travels on the Outer Banks, with it being the thickest on Ocracoke Island and Harkers Island. 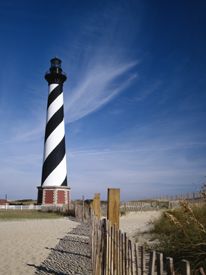 The beacon of the 1870 Cape Hatetteras lighthouse was electrified in 1934 but just a year later the Bureau of Lighthouses decommissioned the lighthouse due to threatening beach erosion. On November 9, 1937, the Cape Hatteras Light Station was transferred to the National Park Service. While the park was not operational at this time, the lighthouse and the keepers’ quarters became part of the nation’s first National Seashore. In the meantime, the beacon was moved to a skeletal steel tower.

As technology improved, the Diamond Shoals became less of a threat, but during World War II a new danger lurked off the Hatteras Island shores in the form of German U-Boats. Stealthy and hard to detect, the U-Boats destroyed several British ships passing through, and it was not unusual for wreckage and even bodies to wash ashore on Hatteras Island on a regular basis.

In 1953, Cape Hatteras National Seashore was officially established, with miles of land donated or sold by local residents. Today, approximately 60% is now protected from private ownership and future development. Then years later, the Herbert C. Bonner Bridge was completed, replacing the former Oregon Inlet ferry, and paving the way for thousands and later millions of visitors to access Hatteras Island. The completion of the bridge caused development and tourism to boom on Hatteras Island and a new oceanfront community known as “Hatteras Colony” was established.

In 1999, the Cape Hatteras Light Station had to be moved due to the threat of shoreline erosion. When completed in 1870, the Cape Hatteras lighthouse was located a safe 1,500 feet from the ocean. Even then, however, storm-driven tides completely washed over Hatteras Island, eroding sand from the ocean side of the island and depositing it on the sound side. By 1970, this process, which has caused the gradual westward migration of the Outer Banks for at least the past 10,000 years, left the lighthouse just 120 feet from the ocean’s edge and almost certain destruction. The light station, which included seven historic structures, was successfully relocated 2,900 feet from the spot on which it had stood since 1870.