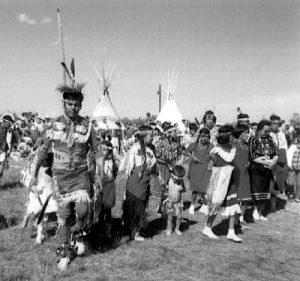 The chief god of the Blackfoot is the Sun. He made the world and rules it, and to him, the people pray. One of his names is Napi—old man; but there is another Napi who is very different from the Sun, and instead of being great, wise, and wonderful, is foolish, mean, and contemptible. We shall hear about him further on.

Every year in summer, about the time the berries ripen, the Blackfoot used to hold the great festival and sacrifice which we call the ceremony of the Medicine Lodge. This was a time of happy meetings, of feasting, of giving presents; but besides this rejoicing, those men who wished to have good-luck in whatever they might undertake tried to prove their prayers sincere by sacrificing their bodies, torturing themselves in ways that caused great suffering. In ancient times, as we are told in books of history, things like that used to happen among many peoples all over the world.

Soon after, the Raven Bearers held a dance. They all painted themselves nicely and wore their finest ornaments and each one tried to dance the best. Afterward, some of them asked for this girl, but she said, “No.” After that the Bulls, the Kit-Foxes, and others of the All Comrades held their dances, and many men who were rich and some great warriors asked this man for his daughter, but to everyone, she said, “No.”

Then her father was angry, and he said, “Why is this? All the best men have asked for you, and still, you say ‘No.'” Then the girl said, “Father, listen to me. That Above Person, the Sun, said to me,

‘Do not marry any of these men, for you belong to me. Listen to what I say, and you shall be happy and live to a great age.’ And again he said to me, ‘Take heed, you must not marry; you are mine.'”

“Ah!” replied her father; “it must always be as he says”; and they spoke no more about it.

There was a poor young man. He was very poor. His father, his mother, and all his relations were dead. He had no lodge, no wife to tan his robes or make his moccasins. His clothes were always old and worn. He had no home. Today he stopped in one lodge; then to-morrow he ate and slept in another. Thus he lived. He had a good face, but on his cheek was a bad scar.

After they had held those dances, some of the young men met this poor Scarface, and they laughed at him and said, “Why do not you ask that girl to marry you? You are so rich and handsome.”  Scarface did not laugh. He looked at them and said, “I will do as you say; I will go and ask her.”

All the young men thought this was funny; they laughed a good deal at Scarface as he was walking away.

Scarface went down by the river and waited there, near the place where the women went to get water. By and by the girl came there. Scarface spoke to her, and said, “Girl, stop; I want to speak with you. I do not wish to do anything secretly, but I speak to you here openly, where the Sun looks down and all may see.”

“I have seen the days,” said Scarface. “I have seen how you have refused all those men, who are young and rich and brave. Today some of these young men laughed and said to me, ‘Why do not you ask her?’ I am poor. I have no lodge, no food, no clothes, no robes. I have no relations. All of them have died. Yet now to-day I say to you, take pity. Be my wife.”

After a time she spoke and said, “It is true I have refused all those rich young men; yet now a poor one asks me, and I am glad. I will be your wife, and my people will be glad. You are poor, but that does not matter. My father will give you dogs; my mother will make us a lodge; my relations will give us robes and furs; you will no longer be poor.”

Then the young man was glad, and he started forward to kiss her, but she put out her hand and held him back, and said, “Wait; the Sun has spoken to me. He said I may not marry; that I belong to him; that if I listen to him I shall live to great age. So now I say, go to the

Sun; say to him, ‘She whom you spoke with has listened to your words; she has never done wrong, but now she wants to marry. I want her for my wife.’ Ask him to take that scar from your face; that will be his sign, and I shall know he is pleased. But if he refuses, or if you cannot find his lodge, then do not return to me.”

“Oh!” cried Scarface; “at first your words were good. I was glad. But now it is dark. My heart is dead. Where is that far-off lodge? Where is the trail that no one yet has traveled?”

“Take courage, take courage,” said the girl softly, and she went on to her lodge.

Scarface was very unhappy. He did not know what to do. He sat down and covered his face with his robe, and tried to think. At length, he stood up and went to an old woman who had been kind to him, and said to her, “Pity me. I am very poor. I am going away, on a long journey. Make me some moccasins.”

“Where are you going–far from the camp?” asked the old woman.

“I do not know where I am going,” he replied; “I am in trouble, but I cannot talk about it.”

This old woman had a kind heart. She made him moccasins—seven pairs; and gave him also a sack of food–pemican, dried meat, and back fat.

All alone, and with a sad heart, Scarface climbed the bluff that overlooked the valley, and when he had reached the top, turned to look back at the camp. He wondered if he should ever see it again; if he should return to the girl and to the people.

“Pity me, O Sun!” he prayed; and turning away, he set off to look for the trail to the Sun’s lodge.

For many days he went on. He crossed great prairies and followed up timbered rivers, and crossed the mountains. Every day his sack of food grew lighter, but as he went along he looked for berries and roots, and sometimes he killed an animal. These things gave him food.