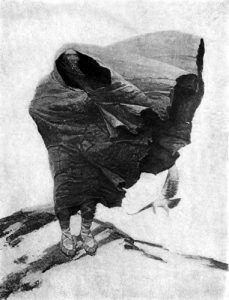 The last lodge had been set up in the Blackfoot winter camp, and evening was closing over the travel-tired people. The sun had dropped beyond the hills not far away. Women were bringing water from the river at the edge of the great circle. Men gathered in quiet groups, weary after the long march of the day. Children called sleepily to each other, and the dogs sniffed about in well-fed content.

Lone Feather wrapped his robe more closely around him and walked slowly from his lodge door and the camp to the north. He was thinking of many things and hardly noticed where he was going. Presently as he walked, he heard the sound of persons talking. He stopped to listen. The sound came from a lodge made of stone, close by the river. Quietly he went toward the lodge and saw a thin blue line of smoke coming from the top.

As he approached, an old woman, bent with age and crippled, came from the lodge door and looked at him.

“Will you come into my lodge?” she said, greeting him.

Lone Feather looked at her for a moment in silence. She spoke again. He could not understand her speech, for she belonged to another tribe. By signs, she made him know that she wished him to come into her lodge and rest. Lone Feather entered.

Far back from the door, crouched two big grizzly bears. She made signs to show that the bears were friendly, and Lone Feather sat down near the door. She stirred the fire, and as she put on fresh wood, the sparks flew up toward the smoke hole, which was opened only a little way.

By signs, she told him she would go out and open the smoke hole wider so that the fire might burn more brightly. She was gone for some time, and Lone Feather sat looking into the fire, still thinking of many things when the air became thick with smoke. He looked up and saw that the smoke hole was closed. He sprang up and went to the door, but the door covering was down. He raised it, and as he put his head out, the old woman hit him with a large stone club, and he was dead.

Before his spirit started for the Sand Hills, he saw that she cut up his body with a large knife and put the pieces into a pot. Soon they were well cooked, and the old woman and the two bears feasted on his flesh.

They threw his bones out of the door, where they fell among many others like them. The ground was strewn with the bones of the persons she had trapped and killed.

Day by day, other persons disappeared from the winter camp, and more and more bones whitened on the ground outside the stone lodge on the river bank.

As Cold Maker was bringing the snow to the Blackfoot winter camp, he passed the Sand Hills. Lone Feather and other ghosts from the Blackfoot tribe were telling each other how the old woman had sent them there. Cold Maker heard their stories, and he was angry.

When he reached the camp, he went to the lodge of Broken Bow—a brave young man but very poor.

He shivered when Cold Maker entered his lodge and drew his ragged robe about him. They were close friends.

“Would you like to have a new robe?” asked Cold Maker.

“Come with me. You may kill two grizzly bears,” said Cold Maker.

“My bow is broken. I cannot,” said Broken Bow sadly.

“I will help you. Bring only a knife.”

Together they went from the lodges toward the north. The sun was already hidden behind the nearby hills.

After they had traveled some distance, they heard the sound of voices. They listened. Two bears were complaining that they wanted meat. A woman told them they must wait. The men saw the line of thin blue smoke rising from the top of the lodge of stone. All about whitening bones covered the ground. They went nearer.

Soon an old woman, bent with age and crippled, came from the door and smiled as she saw the two persons coming.

“Come in and rest,” she said. Broken Bow did not understand her language, but Cold Maker, who understands all tribes, said, “We are cold. Will you let us sit by your fire?”

“You are welcome,” she said; “come in. Do not fear my bears. They are friendly. They will not harm you.” The two friends entered the lodge, where a smoldering fire sent a feeble smoke up to the smoke hole that was partly open. She put fresh wood on the fire and said, “I will open the smoke hole wider,” and went out, dropping the door covering as she went.

Then she closed the smoke hole. The smoke began to fill the top of the lodge. It settled lower and lower. Broken Bow was afraid.

“Give me your pipe,” said Cold Maker.

Broken Bow filled his pipe and handed it to him. He lighted it by a brand from the fire and sent great puffs of smoke curling upward. This smoke met the other smoke and stopped it. It could not descend any lower.

Broken Bow saw the wonderful medicine of his friend. He was no longer afraid but wondered what Cold Maker would do next. The grizzly bears growled low.

The old woman outside called to them, “Friends, is it smoking in there now?”

“Not a bit,” replied Cold Maker. “We are very comfortable.”

She waited. They did not come out. She stood near the door. Her stone club was ready. She grew impatient. She wondered what had gone wrong with her plans. The two friends were silent. She looked at the smoke hole, but it was closed securely. She lifted the door covering to see if the friends within had died. They sat perfectly still. She entered to look more closely, and as soon as she was fairly inside, Cold Maker and Broken Bow rushed out and dropped the door covering. Before she could move, they piled great heaps of stone in the doorway. The bears growled. She called for help. Cold Maker and Broken Bow went on down the river.

Then Cold Maker took from a little sack a few white eagle-down feathers. He blew them from him. At once, a fierce storm blew across the valley. The bitter cold froze the water, but only in this one place. It dammed the stream with fast-forming ice. The water rose higher and higher. It spread out over the banks. Cold Maker and Broken Bow went far off on the hills and watched it. Little by little, it rose. It reached the stone lodge. The bears roared. The woman screamed. The water reached the top and covered the lodge from sight. All sound ceased. A moment more, and the water was quiet. Once more, Cold Maker blew from him a few white eagle-down feathers. The storm subsided. It became warm again. The ice melted. The water retreated to its channel.

Cold Maker and Broken Bow went to the stone lodge. The woman was lying beside the pot. The grizzly bears were close to the stones which blocked the doorway.

Cold Maker said, “Here is your new robe,” and Broken Bow took from the bears their thick, warm skins.

On his way home, Cold Maker again passed the Sand Hills. Entering the country was an old woman bent with age and crippled.

The Ark On Superstition Mountain

Blackfoot Indians Stories was published by George Bird Grinnell in 1913. The text as it appears here; however, is not verbatim as it has been edited for clarity and ease of the modern reader. George Bird Grinnell studied at Yale with an intense desire to be a naturalist. He talked his way onto a fossil collecting expedition in 1870 and then served as the naturalist on Custer’s expedition to the Black Hills in 1874. Grinnell was interested in what he could learn from the Indian tribes of the region, and early on, was well known for his ability to get along with Indian elders. The Pawnee called him White Wolf, and eventually adopted him into the tribe. Grinnell was also editor of Forest and Stream, the leading natural history magazine in North America, the founder of the Audubon Society and the Boone and Crockett Club, and an advisor to Theodore Roosevelt. Glacier National Park came about largely through his efforts. Grinnell also spent significant time working for fair and reasonable treaties with Native American tribes and preserving America’s wildlands and resources.