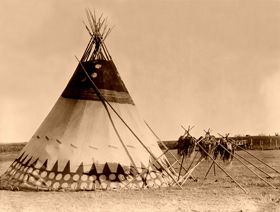 They were pushed over by those behind, and most of the buffalo jumped over the cliff. Many were crippled or injured by the fall, and all were kept within the fence of the piskun below. About this fence the people were collected. The buffalo raced round and round within the pen, the young and weak being injured or killed in the crowding, while above the fence men were shooting them with arrows until presently all in the pen were dead, or so hurt that the women could go into the pen and kill them. The people entered and took the flesh and hides.

Deer, elk, and antelope were shot with arrows, and antelope were often captured in pitfalls roofed with slender poles and covered with grass and earth. Such pitfalls were dug in a region where antelope were plenty, and a long shaped pair of wings, made of poles or bushes or even rock piles, led to the pit. The antelope is very inquisitive and was easily led within the chute and there frightened, as were the buffalo, by people who had been concealed and who rose up and showed themselves after the antelope had passed. This was done more in order to secure antelope skins for clothing than their flesh for food.

Fish and reptiles were not eaten by the Blackfoot, nor were dogs, although dogs, wolves, and coyotes are eaten by many tribes of plains Indians. Most small animals, and practically all birds, were eaten in case of need. In summer, when the wildfowl which bred on so many of the lakes in the Blackfoot country lost their flight-feathers, during the moult, and again in the late summer, when the young ducks and geese were almost full grown but could not yet fly, the Indians often went in large parties to the shallow lakes which here and there dotted the prairie, and, driving the birds to shore, killed them in large numbers.

Earlier in the season, when the fowl had begun to lay their eggs, these were collected in great quantities for food. Sometimes they were roasted in the hot ashes, but a more common way was to dig a deep, narrow hole in the ground in which the eggs were to be cooked. Several little platforms of small sticks or twigs were built in this hole, one above another, and on these platforms they put the eggs. Another much smaller hole was dug to one side of the large hole, slanting down into it. The large hole was partly filled with water, and was then roofed over by small sticks on which was placed grass covered with earth. Stones were heated in a fire built near at hand, and then were rolled down the side hole into the larger hole, heating the water, which at last boiled and steamed, the steam cooking the eggs.

When the Americans first met them on the prairie, the Blackfoot were known as great warriors. But up to the time when they got from the Hudson Bay traders better weapons than they had before known, whether these were metal knives, steel arrow points, or guns, it is probable that they did not do much fighting. There seems to have been no reason why they should have fought, unless they quarrelled about small matters with other tribes. It became quite different when the Indians procured better arms and, above all, when they got horses — a means of swiftly getting about over the country, something that all people wanted to have and which all were so eager to obtain that they would go into danger for them. In the old days of stone arrow heads, when they had to travel on foot and to carry heavy loads on their backs, the whole thought and effort of the tribe must have been devoted to the work of procuring a supply of food.

The tribal and family life of the people was simple and friendly. The man and his wives loved each other and loved their children. Relationship counted for much in an Indian camp, and cousins of remote degree were called brother and sister. Children were not punished; they were trained by persuasion and advice. They were told by older people how they ought to act in order to make their lives happy and successful and to be well thought of by their fellows. Young people had much respect for their elders, listened to what they said, and strove more or less successfully to follow their teachings.

The Blackfoot were very religious. They feared many natural powers and influences whose workings they did not understand, and they were constantly praying to the Sun — regarded as the ruler of the universe — as well as to those other powers which they believe live in the stars, the earth, the mountains, the animals, and the trees. The Blackfoot was constantly afraid that some evil thing might happen to him, and he therefore prayed to all the powers for help — for good fortune in his undertakings, for health, plenty, and long life for himself and all his family.

Among these tribes there are a number of secret societies known as the All Comrades or All Friends — groups of men of different ages, which have been alluded to in the stories. Originally there were about twelve of these societies, but a number have been abandoned of recent years. 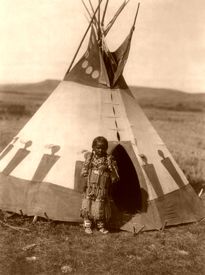 The tribe was divided into a number of clans, all the members of which were believed to be related, and in old times no member of a clan was permitted to marry another member of the clan. Relations might not marry.

In olden times, when large numbers of people were together, the lodges of the camp were pitched in a great circle, the opening toward the southeast. In this circle each clan camped in its own particular place with relation to the other clans. Within the circle was often a smaller circle of lodges, each occupied by one or more of the societies of the All Comrades. Sometimes it happened that great numbers of the Blackfoot came together, perhaps even all of the three tribes, Blackfoot, Bloods, and Piegans. When this was the case, each tribe camped by itself with its own circle, no matter how near it might be to one or other of the tribal circles.

We read of some tribes of Indians which believed that after death the spirits of the departed went to a happy hunting ground where game was always plenty and life was full of joy. The Blackfoot knew no such place as this. When they died their spirits were believed to go to a barren, sandy region south of the Saskatchewan, which they called the Sand Hills. Here, as shadows, the ghosts lived a life much like their existence before death, but all was unreal — unsubstantial. Riding on shadow horses they hunted shadow buffalo.

They lived in shadow camps and when they moved shadow dogs hauled their travois. There are stories which tell that living people have seen these hunters, their houses, and their implements of the camp, but when the people got close they found that what they thought they had seen was something different. It reminds us a little of the old ballad of Alice Brand, where Urgan tells of the things seen in fairy-land: