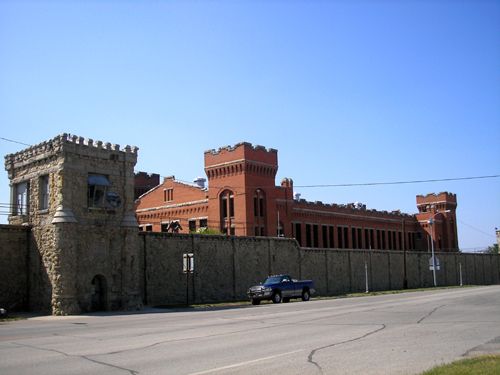 Like other fledgling territories in the 19th century American West, Montana had become wild when the gold rush attracted not only those wishing to find their fortunes, but also thieves, gamblers, and murderers. For several years following the gold discoveries of 1862, the Montana Vigilantes took it upon themselves to punish these many offenders in the lawless land of Montana. Finally, seeing a need for more organized forms of law enforcement, the Montana Territorial Legislature requested funds for a prison during its winter session of 1866-67. The United States Congress agreed that the territory needed a prison, approved the request for funding, and Deer Lodge was chosen for the site of the new Territorial Prison.

However, they soon found that the funding was inadequate causing revisions to the plans and many delays. Construction finally began in the spring of 1870 with convict labor, and the prison finally received its first convict on July 2, 1871.

Almost from the beginning, the prison was deemed inadequate and overcrowded, a condition that would result in slow, but continual construction at the prison for the next fifty years. When Montana became the forty-first state on November 8, 1889, the prison became Montana’s responsibility. Finding it expensive to operate, the Board of Prison Commissioners contracted out the entire Prison operation in 1890. Colonel Thomas McTague and Frank Conley of Deer Lodge received the contract, which paid them seventy cents per prisoner per day.

Frank Conley became the new warden, a post that he would continue to hold until 1921. Over the next thirty years, Conley shaped the philosophy and appearance of the prison. Believing the prisoners should work, Conley began to update the prison by first replacing its twelve-foot wooden fence with the massive sandstone wall in 1893. Four and a half feet thick, the wall formed a solid perimeter for the prison. He also began to build a new log cell house to reduce prison crowding. 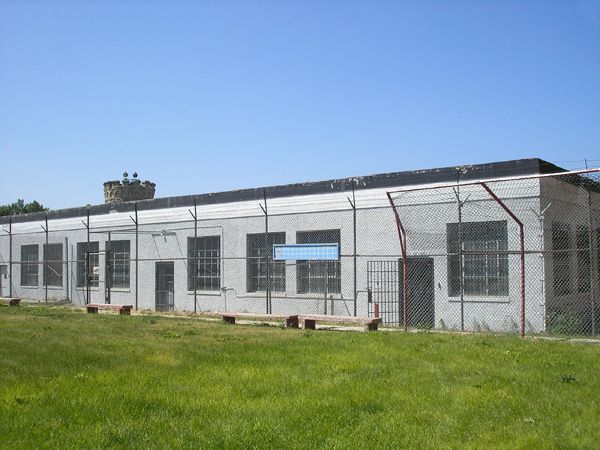 As a further measure to reduce crowding, he put the prisoners to work, which generated income from the prison; and outside prison camps were established where prisoners would live and be “hired out” for both public and private work. This worked so well that by the late 1890’s approximately one-third of the prisoners worked outside the prison. At these camps, which housed about 75 prisoners each, inmates enjoyed a relatively high degree of freedom with neither chains nor cells restricting them. However, “outside work” was a privilege, and the slightest infraction of the rules would immediately send a prisoner back behind prison walls.

By the second decade of the twentieth century, about fifty percent of the inmates were working outside the penitentiary, traveling throughout Montana erecting numerous state buildings, paving more than five hundred miles of roads, and working on eleven different ranches that provided food for state-owned institutions.

In 1908, the prison witnessed one of its most tragic events when two prisoners by the names of George Rock and William Hayes attempted to escape. Fleeing from the Federal Building, their failed attempt resulted in the death of Deputy Warden John Robinson and Warden Frank Conley was required to get 103 stitches in his back and neck from stab wounds he received from the inmates. As a result, George Rock was hanged inside the prison yard that very year, and William Hayes met a similar fate the following year. They were the only inmates to be executed in the prison. 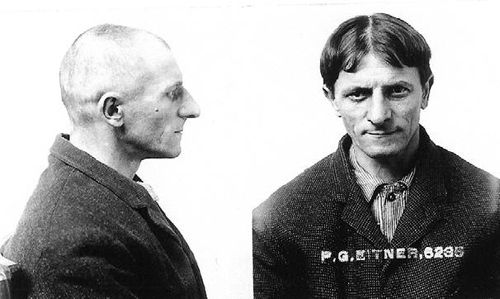 Not all the inmates were so violent, however, and one was downright liked by the guards and prisoners. At the age of 40, Pete Eitner was convicted of murder and sentenced to life in 1918.

A model prisoner, he was assigned to tend to the prison turkeys and soon garnered the nickname of “Turkey Pete.” As he aged, he began to lose some of his mental facilities and when a man stopped one day to admire his turkeys, Eitner sold him the entire flock for 25 cents each. This ended his turkey tending days, but that was ok, because he soon fantasized a new “job” as the owner and administrator of the prison. Prison officials humored him, “allowing” Eitner to “run” the prison from his cell. Fake checks were printed for him, with which he paid the prison expenses and payroll. He would also tell anyone who would listen that he had the coffee crop in Brazil one year, sold pink alligators, ships to the navy, and grasshopper legs to Fidel Castro. 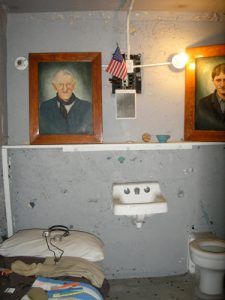 When Turkey Pete died in 1967 at age 89, his cell (#1) was retired. His funeral was the only one ever held within the walls of the prison. Today, Cell #1 displays photos of Turkey Pete, as well as his few belongings.

Inside the prison walls, construction also continued with the building of a women’s prison, additional dormitories for the men, a store building, laundry, and dining room. In 1919, a 1,000 seat prison theater was built with funding donated by Senator William A. Clark, Jr.

Protests from labor unions and security concerns put an end to outside work in the 1920s; however, food production continued at the thirty-thousand-acre prison-owned ranch. Work inside the prison continued in various industries including cobbler and upholstery shops, and a garment industry that made clothes for state wards. A state license plate factory began production in the late 1920s.

Though Conley’s administration made drastic improvements to the prison, it continually suffered from overcrowding through the decades.

On April 16, 1959, the prison suffered a major riot when two inmates by the names of Jerry Myles and Lee Smart, Jr. led some 12 inmates in an escape attempt. In the melee,  Deputy Warden Theodore Rothe was shot and killed, and Warden Powell was temporarily held hostage.

The hostages were held for three days while the riot raged on. After the National Guard was brought in, the two ringleaders died in a murder-suicide, When Myles shot Smart and then turned the gun on himself. 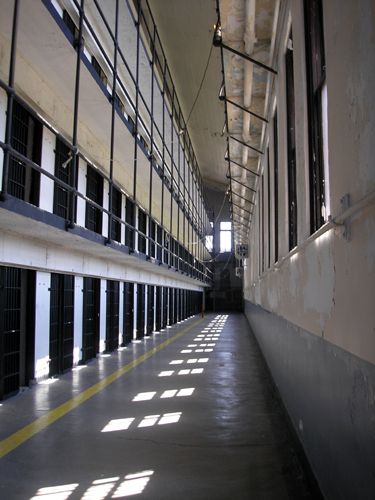 Finally, the old and overcrowded prison was closed In 1979, and its prisoners moved to a new facility, five miles west of Deer Lodge.

Empty of prisoners and standing as a silent sentinel to justice, the Powell County Museum and Arts Foundation obtained the building’s lease for use as a museum. After some restoration and the construction of a visitor’s center, the complex reopened in 1980, providing tours to more than 40,000 visitors each year.

Listed on the National Registry of Historic Places, visitors to the museum can take guided or self-guided tours through several of the prison’s buildings, glimpsing the daily life of prison routines. As visitors walk through the intimidating cell houses, Informational signs provide details of prison life where tourists will continue to see original schedules, rules, prisoner artwork, and even moldering blankets on many of the iron cots in its prison cells. More lurid displays show a “Prison Life” photo exhibit, contraband items and homemade weapons; and guns, shackles, and restraints utilized on the convicts. 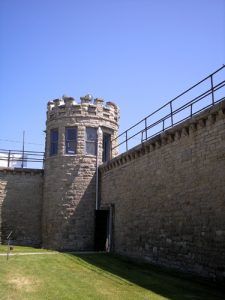 Evidence of a 1959 riot can be seen in the shattered bricks of the west tower, cramped blackout cells can be toured, and the gallows that once hanged capital offenders remain for those of us with a morbid curiosity.

Though guards no longer occupy the turrets in each corner of “The Wall,” nor do the sounds of heavy cell doors sliding shut echo through the buildings, the tour can make even the most hardened visitor welcome their “release” into the grassy center yard.

The Old Montana Prison Museum is just one of several museums sponsored by the Powell County Museum and Arts Foundation. In fact, Deer Lodge, Montana is home to more museums and historical collections than any other town in the Northwest. You can also see the Frontier Museum, Desert John’s Saloon Museum, and the Powell County Museum, all of which will transport you back to the era of cowboys and the Old West. The Montana Auto Museum features over 120 vintage vehicles, and Yesterday’s Playthings is Montana’s foremost doll and toy museum. Cottonwood City displays the Snowshoe Creek School and the Blood Cabin. 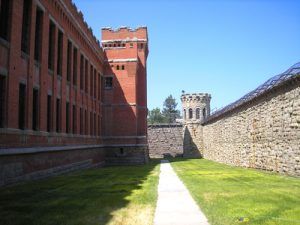 Two prisoners were hanged in this side yard of the Old Montana Prison.

The Writing of Jerry’s Riot: The True Story of Montana’s 1959 Prison Disturbance