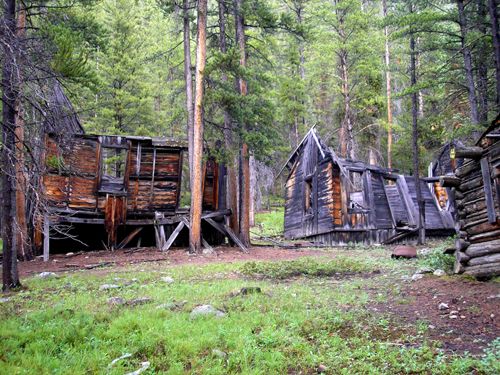 Most of Coolidge’s buildings are tumbling, Kathy Weiser-Alexander.

Empty of people today and most of its buildings tumbling to the ground, Coolidge, Montana was once a beehive of activity.

Mining began, in what became known as the Elkhorn Mining District, when rich veins of silver were discovered high in the Pioneer Mountains in 1872, by a man named Preston Sheldon. The claim was called the “Old Elkhorn” because a pair of elk horns had been found near the discovery site.

Two years later, another major vein was found by Mike T. Steele that was called the Storm Claim. As more prospectors began to flood the area, dozens of claims and mines began operations; however, the work was severely restricted due to the lack of economical transportation.

In the early days, the ore had to be hauled by wagon to Corinne, Utah, before being sent by railroad to San Francisco. Despite the transportation problems, many of the mines were profitable and became even more so following the completion of the Utah and Northern railroad to Silver Bow, Montana, in December 1881.

Though numerous mines were operating in the area, including the Critic, Fraction, Navajo, Good Enough, Park, Red Sky, Hamburg, Washington, Guy, Last Chance, Cleopatra, Mascot, and Cleveland, it would still be decades before the town of Coolidge got its start. In 1893, when silver prices crashed, all of the area mines were closed for the next ten years. Only small prospectors working their claims remained.

However, by 1903, silver prices had recovered enough to restart some of the Elkhorn operations, and new finds stimulated interest in reopening the Elkhorn Mine. But, for several years, financing was an issue, and the mine continued to sit silent. Finally, in 1906, a man named Frank Felt began to buy up several claims in the district, and he, along with M. L. McDonald and Donald B. Gillies, started a tunnel on the Idanha vein, which eventually would become the major producing mine in the Elkhorn District.

In 1911, a Montana politician named William R. Allen also began buying claims and in 1913 formed the Boston Montana Mining Company. After investigating the claims, the company began efforts to reopen the Elkhorn Mine, and the following year the town of Coolidge was born, named after William Allen’s friend, Calvin Coolidge. With numerous miners and their families in the area, the settlement quickly thrived with modern amenities, including telephone services and electricity.

In 1917, construction began on the last narrow-gauge railroad in the U.S., from the Elkhorn Mine to Divide, Montana, at the cost of about $1.5 million. A school district was organized in October 1918, and the following year, the Montana Southern railway was completed.

A number of men and their families moved into Coolidge when work started on a new mill in 1919. Initially, many of them lived in tents, which were later replaced by more substantial log buildings. The town also boasted a boarding house and restaurant and a company store that provided all manner of food and supplies to the town’s residents. Amazingly, the mining camp never held a saloon, but alcohol was said to have been available from a local still outside of the camp. It also never built a church.

The largest mill in Montana, it had the capacity to process 750 tons of ore per day with a recovery rate of 90-93%. Most of the ore processed by the mill came from the Idanha tunnel located at the upper camp, which also sported a sawmill, three bunkhouses, a boarding house, a blacksmith shop, a carpenter shop, and several cabins. 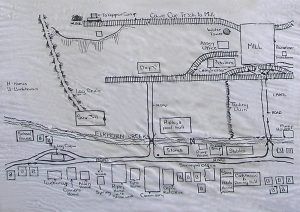 However, by the time the mining operations had been fully developed, it was already beginning to struggle as silver prices plummeted and the national economy took a downturn.

The mill was never able to work at full capacity, as the veins of ore were not developed enough to supply sufficient ore to keep it running. The operations then began to mine lower-grade ore and high-grade silver, but even this failed to produce enough ore for the mill.

By 1923, the mining operation was placed into receivership, and William Allen lost his personal fortune and control of the property. Though the mine continued to operate and some 24,000 feet of underground tunnels were developed by 1925, it was not enough to make the operation profitable.

To make matters worse, the Wise River Dam failed in 1927, washing out 12 miles and several bridges of the railroad and suspending ore shipments.

Soon, the school district was closed as many of the miners, and their families had begun to move away. 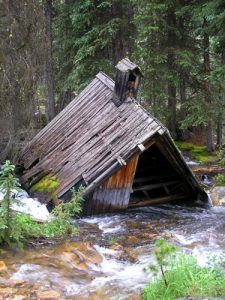 By the time the railroad was repaired in 1930, metal prices had declined to such an extent that the mine was not profitable to operate. By 1932, the vast majority of the townspeople were gone, and the post office was discontinued. At its peak, Coolidge boasted a population of about 350 people.

Despite the mine and mill’s limited development, some 50,000 tons of ore, including gold, silver, copper, lead, and zinc, had been processed by 1927. Over the next several years, the mine changed hands numerous times, and operations were intermittently continued but were never very successful. Along with other mining investors, William Allen, who had lost his fortune in the Elkhorn Mine, continued to believe in the mine’s potential, looking for investors until 1953.

In 1981, the Elkhorn mines were bought by Timberline Minerals, Inc., who, once again, completed some exploratory prospecting work, but this lasted only a couple of years.

Today, the site is located within the Beaverhead Deerlodge National Forest, and though dozens of buildings continue to stand, they are quickly being reclaimed by Mother Nature. The lower mill was torn down years ago, and according to a Legends’ reader, the upper mill was burned down several years ago. The reader also indicates that on their last visit, there was asbestos insulation coming out of the walls of several of the cabins (updated 2016).

Coolidge is located south of Butte, Montana. From I-15, travel west on SR-43, then south onto NF-73 (Wise River Polaris Road), then east down a dirt road. It then requires about a ½ mile hike to the old townsite. 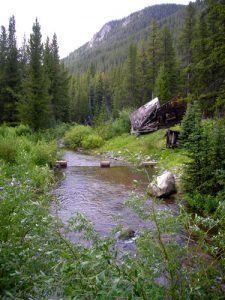 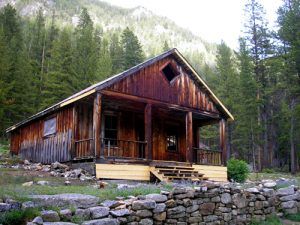 This is the most intact building in Coolidge, and apparently, the forest service has made some small strides in preserving it. Kathy Weiser-Alexander.