Sitting on the eastern slope of the Continental Divide between the towns of Basin and Boulder, Comet, Montana, is one of the state’s most intact ghost towns. Not restored nor preserved, the site is located on private land but, at this time, remains open to the public.

Mining began in what would become known as the High Ore Mining District as early as 1869 when a man named John W. Russell began to prospect in the area. However, after working on his claim for five years, Russell sold it to the Alta-Montana Company in 1874. The new company began to invest in mining operations and soon built a 40-ton-per-day concentrator, a mill process that separates the ore from the dirt and rocks.

Two years later, in 1876, the town of Comet was surveyed and platted as more and more people began to move into the area. The following year, the post office opened in Comet, but growth came slowly to the town.

In 1879 the Alta-Montana Company invested over $500,000 in developing the Comet and nearby Alta Mine. However, their efforts were unsuccessful in turning a profit due to the high costs of transportation. But, director and major stockholder of the Alta-Montana Company, Samuel T. Hauser, was determined to make a go of the Comet Mine and in 1883 formed the Helena Mining and Reduction Company, which bought the assets of the struggling Alta-Montana Company and again began to invest in the Comet Mine. The following year, the Helena Mining and Reduction Company constructed a new smelter, one of the largest of its kind in Montana territory, at Wickes, some six miles northeast of Comet. He then built a 100-ton concentrator and a tramway to carry the concentrate to the smelter. But, it was when Hauser induced the Northern Pacific Railway to construct a branch line between Helena and Wickes that Comet really began to grow. 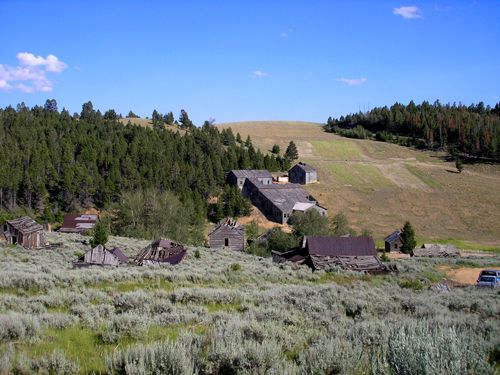 Soon, mining operations were expanded again, adding more mining equipment and hiring more men. Comet’s heyday years were during the 1890s when the mine became profitable enough to even whether the silver panic and depression of 1893. At this time, the town boasted some 300 people, a school, which taught more than 20 children, numerous businesses and homes, and more than 20 saloons.

However, by the turn of the century, the ore was beginning to play out, and the mine sold several times over the next several years. By 1913, the town had become a ghost.

Things changed again in 1927 when the Comet and the Gray Eagle Mines were purchased by the Basin Montana Tunnel Company, who again made improvements, building a 200-ton concentrator, described at the time as “the most modern in Montana.”

With better technology, the mines were buzzing again, employing about 300 men and weathering the depression years. In the 1930s, the operation was the second-largest mining venture in Montana, after Butte. Mining operations continued until 1941, at which time most of the equipment was sold, the people moved away, and Comet became a ghost town for good.

Over the years, the Comet mine produced some $20 million in lead, zinc, iron, copper, silver, and gold ore and was the richest mine in the district. The nearby Gray Eagle Mine produced over $2 million in ore. 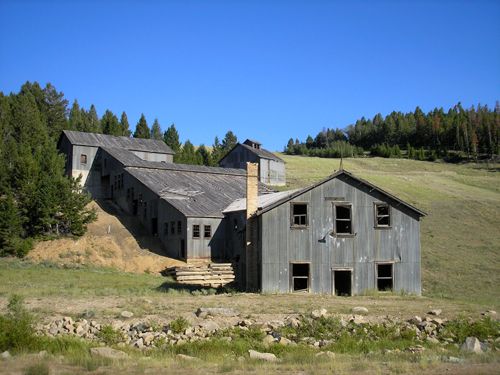 The Comet Mill was built during the town’s second boom in the 1920s, Kathy Weiser-Alexander.

Today, the town sits silent, crumbling amongst the sagebrush and weeds. Though Mother Nature and years of vandalism have taken a toll on the old town, more than two dozen buildings continue to stand, testifying to more prosperous times. Only one family remains in residence.

Comet is located about 37 miles southwest of Helena, Montana. Travel south of Helena on I-15 to Exit 160. Travel north on High Ore Road for about five miles.