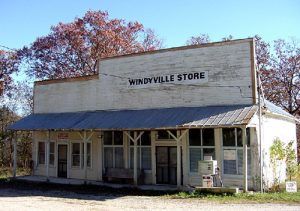 For years, I’ve carried on a not-so-friendly debate with some of my artist friends from the West Coast about their ideas of what constitutes a good subject. We seem to agree on certain things, like apples and oranges—and even certain landscapes. But when it comes to their paintings of dilapidated old farm buildings, we part company.

Some folks see rundown farmhouses and caved-in barns as romantic. Artists paint pictures of buildings with weathered boards, leaning at impossible angles—and people take those paintings home and hang them on their walls.

But for me, I see those same abandoned farmsteads as unspeakably sad. After all, each one of those boarded-up farmhouses represents the death of someone’s hopes and dreams for the future of their children and themselves.

I get the same sad feeling whenever I pass through a small town that was once a thriving place, full of life and activity, but now sits empty and lifeless, slowly crumbling back into the black earth from which it sprang. Last week, I was lost on some back road (not an unusual situation for me) when I came across just such a ghost town.

There was no name that I could see, but there were three buildings huddled next to each other against the prairie wind, and I could still make out some faded letters above their doors. The first one had been a general store, the second a garage, but the third building captured my imagination. On its side was printed the word “Hotel.”

And how did people get to this village to stay in this mysterious hotel? I saw no railroad tracks, and there’s only one road running through town.

The garage implied the town was still alive when cars came into general use, but cars have been around a long time, and that still didn’t explain the need for a hotel in a town with only two other buildings. 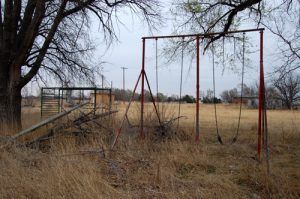 For whatever reason, I am enamored with old schools and playgrounds, so often found in these emerging ghost towns. This old playground in Nekoma, Kansas sits silently today, as its swings and teeter-totters sway in the gusts of the Kansas wind. Kathy  Alexander.

Perhaps that’s why my artist friends find old buildings and farmsteads so intriguing. There’s definitely a sense of mystery about them—stories that will never be known. On that much, we can agree. But no one can convince me those lonely scenes are picturesque.

I can hardly look at old towns like that without being overcome with a difficult to explain sadness. What are the stories of those forlorn storefronts? Why did people come to that little town and stay in their little hotel? What about the rusty skeleton of a combine on the edge of town, its bones bleaching in the sun?

I don’t know, and I never will—and ghosts don’t talk.

Just don’t try to tell me that such a scene is something I’d want to hang on my wall and look at every day.

About the Author:  Gary Anderson is a freelance writer, editor, ghostwriter, and manuscript analyst, living on a small Iowa farm. He’s published more than 500 articles and four books. He’s also ghosted a dozen books, edited more than 30 full-length manuscripts, produced seven newsletters, and has done more than 800 manuscript reviews for various publishers around the nation. The Sadness of Old Buildings is from Gary E. Anderson’s book No Smooshing!