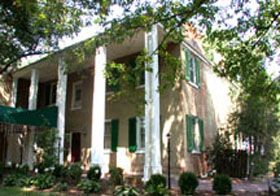 One of St. Louis, Missouri’s oldest historical landmarks is the Bissell Mansion that now serves as Bissell Mansion Restaurant & Murder Mystery Dinner Theatre. Legend has it that the Bissell Mansion has more mysteries than just those presented in their dinner theatre productions. It also has a “mysterious” ghost who continues to lurk on the premises.

The Bissell Mansion, situated on a high bluff overlooking the Mississippi River, was built by Captain Lewis Bissell in 1823. Bissell, born in Connecticut on October 12, 1789, came from an impressive family of American military leaders. His father, Major Russell Bissell, was the first commandant of Fort Bellefontaine. He was also the nephew of the famous General Daniel Bissell, who became the first Commandant of the U.S. Military Department of Missouri. As such, he welcomed the Lewis and Clark expedition upon their arrival in St. Louis. Following in their footsteps, Lewis Bissell began his military career at the age of 19 and was soon sent by President Thomas Jefferson to what was then known as the Western frontier.

When he returned from the “frontier,” Bissell began to acquire real estate in the 1820s, mainly, some 1,500 acres that became known as Bissell’s Point. The “point” spread east of Bissell’s Mansion to the Mississippi River and north to the frontier outpost of Fort Bellefontaine, which guarded the confluence of the Mississippi and Illinois Rivers. He also married Mary Woodbridge in 1821. Once his mansion was completed, several more fine houses were built on Bissell Point, which quickly became “the place to live” in North St. Louis. Bissell’s home was surrounded by many trees and had an orchard extending toward the river. Lewis’ wife Mary died in 1831, and he remarried six years later to Mary Jane Douglas. Bissell lived in the house for more than four decades before he died there at the age of 79 in 1868. A northwest wing of the house was added in1883 by Frederick Kraft, a later owner. Over the years, the building changed hands a number of times and the area deteriorated. 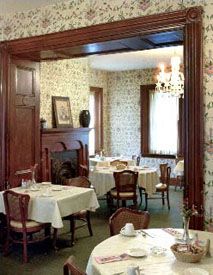 When I-70 barreled through St. Louis in the late 1950s, the Landmarks Association saved the historic home, and today it survives as the Bissell Mansion Restaurant & Murder Mystery Dinner Theatre. The oldest house in St. Louis features much of its original detailing, including the staircase, fireplace mantels, and interior trim work.

On weekends, the Bissell Mansion now provides a mystery dinner theatre, in which customers participate and receive a four-course dinner between acts of the show. The restaurant is also open for lunch and weeknights.

While most of the historic homes on Bissell Point were lost to the “wrecking ball,” the Bissell Mansion survived, along with its resident ghost, which is seemingly none other than Captain Lewis Bissell himself. Evidently keeping a watchful eye on his property, the Captain has often been spied in the parking lot, looking toward the house.

Inside the mansion is another spirit of an unknown woman, perhaps one of Bissell’s wives. She appears in a long, flowing white evening gown, walking up the stairs, sometimes turning to smile. Though both of these spirits have been described as friendly, and even “comforting,” there are sometimes bizarre happenings inside the restaurant – events that first began during the renovation of the property in the 1980s — the most common, according to staff, is that wine glasses seemingly disappear before amazingly reappearing days later.

Ghosts of the Bethlehem Cemetery