“Here I will spend my leisure, secure from the worries of business and the excitement of city life. I will fish and loaf and explore the caves of these hills, with no fear of intrusion.” — Robert McClure Snyder owner of the Ha Ha Tonka Castle

Long before Robert Snyder built his famous stone castle high among the bluffs of the Ozarks; the area was home to the Osage, Cherokee, and other Native American  tribes. Many early explorers traveled through the area including Daniel Boone and his son Nathan, and later, Zebulon Pike passed nearby on his way to explore the West. 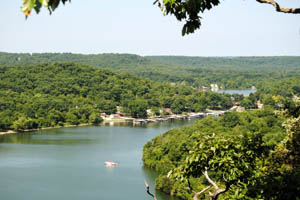 Niangua Arm of Lake of the Ozarks, from the Ha Ha Tonka Mansion by Kathy Weiser-Alexander.

When pioneers began to settle here, a man by the name of Robert G. Scott surveyed the property as a possible railroad route in the early 1890s. Though this idea was not feasible, Scott was taken by the scenic beauty, high bluffs, caves and natural springs. Returning to his native Iowa in 1894, he convinced a partner named Kellogg into purchasing a large tract of land, built a small settlement, and named it Gunter Springs, after an early resident of the area. Approximately three miles southwest of present-day Camdenton, Gunter Springs quickly sprouted several new buildings. However, Scott wanted to change the name of the settlement to something more romantic and indicative of the distinctive landscape and beauty of the area. Finally, he settled upon the Osage Indian phrase “Ha Ha Tonka” meaning “Laughing Spirit” in reference to the gushing springs. In 1895, the post office was changed from Gunter Springs to Ha Ha Tonka.

In 1903, Robert McClure Snyder, a wealthy businessman from Kansas City, Missouri first visited. He was so impressed that he eventually purchased some 2,500 acres envisioning a private retreat for his family. His initial purchase from Robert Scott included the settlement of Ha Ha Tonka and Ha Ha Tonka Lake and spring, which made Scott a large profit. 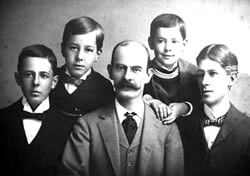 Robert Snyder and his four sons

Scott, however, retained some tracts along the Niangua River and in later years he operated Camp Neongwah, a rustic retreat, and campground near the banks of what was about to become the Lake of the Ozarks.

Snyder, one of seven children born to John and Sarah Pence Snyder in Columbus, Indiana in 1852, came from humble beginnings. His father, grandfather, and great-grandfather were millers by trade, owning mills and grocery stores in Virginia, Kentucky, Indiana, and Missouri.

In 1876, Snyder moved to St. Louis, Missouri and worked in the wholesale grocery business, and in 1880, moved again to Kansas City where he continued to work in the industry. However, the innovative young man later began to speculate in real estate, banking, and utilities, eventually amassing a fortune. By 1905, his assets included land holdings, real estate, oil and natural gas wells, herds of cattle, banking interests, and other investments across the nation. 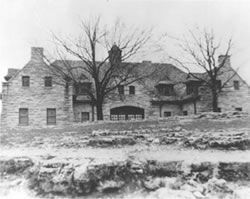 When Snyder purchased the property from Scott in 1904, he immediately began to make extensive improvements. Envisioning a European-style castle with a center atrium rising three and one-half stories to a skylight, nine greenhouses, a carriage house, and an 80-foot private water tower, construction on the mansion began in 1905. Utilizing stonemasons from Scotland, they quarried stone and timber from the immediate area, as a European supervisor managed every step of the construction.

The three-and-a-half story masterpiece was designed by Kansas City architect, Adrian Van Brunt, and included a central hallway that rose the entire height of the building, as well as a stone carriage house. Snyder said of the retreat, “Here I will spend my leisure, secure from the worries of business and the excitement of city life. I will fish and loaf and explore the caves of these hills, with no fear of intrusion.” 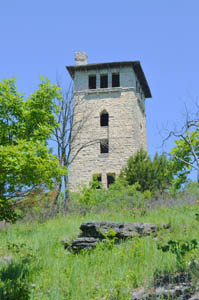 However, for Snyder, Ha Ha Tonka remained only a dream. In 1906, he was killed in an automobile accident on Independence Boulevard in Kansas City – one of the state’s first automobile accidents. His obituary in the Kansas City Journal on October 29, 1906, said, “He was a man who understood big things and made them win by keeping up the fight when other men might have been ready to give it up.” His tragic death brought an end to the rise of a powerful businessman, and a stop to the building of his mansion at Ha Ha Tonka.

For 16 years, the castle remained unfinished. Though Snyder’s sons Robert Jr., Leroy, and Kenneth continued the work, the pace was slow and not nearly as elaborate as the original plans. In 1922, the interior and upper floors were finally completed. During this time, Robert Snyder, Jr., lived in the castle. Plagued by health problems, he cultivated an interest in local and regional history, collecting every book on the subject that he could get his hands on. Amassing a collection of over a thousand volumes, the collection of Missouri and regional history, literature and folklore was kept at the castle until his death in 1937. Today the massive collection is housed at the University of Missouri-Kansas City. 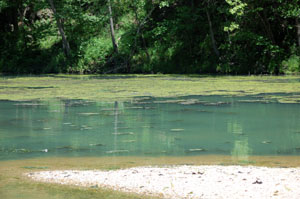 However, by the time the castle was finally complete, the family businesses began to decline and troubles with the property were just beginning. The family faced years of adversity trying to keep the castle in the family when a long legal battle against Union Electric ensued over the waters of the Ozarks that were encroaching upon the natural spring-fed lake at the foot of Ha Ha Tonka Cliff. The family was forced to sell Snyder’s natural gas supply business to eastern interests to finance the long legal battle. By 1937, at the time of Robert Snyder, Jr’s death, the Great Depression and the court litigation’s had depleted the family fortune and the surviving brothers were forced to take other financial steps with the mansion. Leasing the building to a woman named Mrs. Ellis; she operated the historic building as a hotel for the next several years.

In 1942, tragedy struck the castle again when sparks from one of its many fireplaces ignited the roof. Within hours, the mansion was gutted as well as the nearby carriage house. All that was left were the stark, devastated outside walls of the mansion and the nearby water tower. Again, the mansion was abandoned, sitting silently upon the cliff overlooking Ha Ha Tonka Spring and the Lake of the Ozarks for the next 36 years. 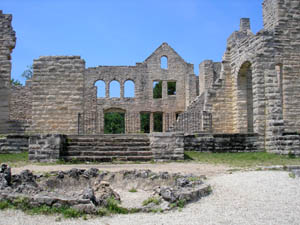 Unfortunately, in 1976, vandals torched the water tower, and only the ruins of the castle remained. Today the old water tower has been restored to its original state. In 1978, the State of Missouri purchased the estate and opened it to the public as a State Park.

Comprising approximately 3,000 acres on the Niangua Arm of the Lake of the Ozarks, the park offers an array of geographic formations, caves, streams and natural bridges, in addition to the ruins of the Ha Ha Tonka Castle.

Trails and boardwalks provide easy access for visitors to experience the park’s many tunnels, caverns, springs, and sinkholes. More than 400 species of plants have been recorded at the park, with wildflower displays changing throughout the summer.

A short self-guiding nature trail, as well as a seven-mile backpack trail, allows visitors to experience the rich landscape. A visitor center features a large relief map of the park carved from stone. The State Park on the Niangua Arm of the Lake of the Ozarks is five miles southwest of Camdenton, Missouri. 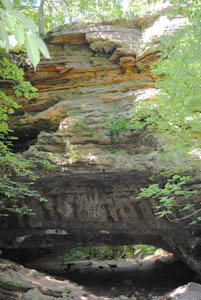