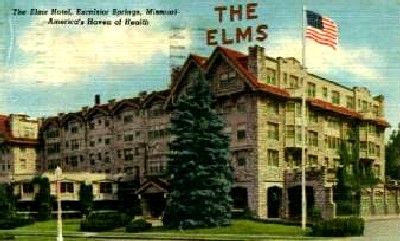 The Elms Hotel in Excelsior Springs, Missouri, with a history dating back to the 1880s, has burned down twice and has a spooky story or two.

In the summer of 1880, Indians and hunters told a man named Travis Mellion that the area’s natural springs had strong healing powers. Mr. Mellion had a very sickly daughter, ailing from tuberculosis, and decided to give it a try. After just weeks of bathing in the spring and drinking its water, the young girl was cured. Another man named Frederick Kigler tried the springs for a leg affliction and had the same results. In no time at all, the legend of the springs spread, and people were arriving from great distances to test the results for themselves. Within a year, 200 houses were built, and the town of Excelsior Springs was founded.

In 1888, the Excelsior Springs Company built the first Elms Hotel on a 50-acre site surrounded by rolling acreage and lush trees. Accommodating the many visitors to the spring, the three-story hotel had broad, shady verandas on all four sides, where an orchestra entertained guests. The luxury hotel also boasted a large heated swimming pool, a four-lane bowling alley, a target range, and a billiards room.

Just ten years later, the beautiful hotel was destroyed by fire on May 8, 1898. Luckily, no one was injured, but the building was a complete loss. After the fire, plans were begun to rebuild the hotel, but construction did not begin until 1908. In July 1909, the new Elms had its second grand opening, and its popularity continued to grow.

But, alas, it was almost as if this spot had a curse upon it because less than two years later, on October 29, 1910, the hotel burned down again. Following a large party in the Grand Ballroom, the fire spread throughout the interior walls igniting a boiler and setting the roof ablaze. The structure was a complete loss, but thankfully, no one was hurt.

The owners were determined to rebuild; however, to generate additional funds for reconstruction, some of the hotel’s land was sold. This time they built the hotel fire-safe, constructed of native Missouri limestone, with steel frames and reinforced concrete. The hotel held its final grand opening on September 7, 1912. Over 3,000 people visited on its grand opening day.

During the prohibition years, the Elms reputation grew as a popular speakeasy. As such, the hotel attracted several known gangsters, including Al Capone. Under the watchful eye of his machine gun-toting guards, Capone was known to conduct all-night drinking and gambling parties. At one time, Al Capone lined up and tipped several staffers, each with a one-hundred-dollar bill, a tradition which is, no doubt, encouraged yet today.

During the depression, the historic hotel suffered along with everyone else and was temporarily closed. 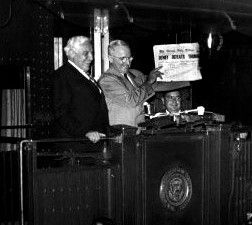 Harry S. Truman holding a copy of the Chicago Tribune.

During the 1948 presidential election, Harry S. Truman sought refuge at the hotel when it appeared that he was losing his re-election bid. However, in the wee hours of the morning, he was awakened by his aides informing him that he had, in fact, won the election and was whisked away to Kansas City, where he was photographed holding a copy of the Chicago Tribune proclaiming Dewey the winner.

In 1966, the hotel suffered another economic downtown following the U.S. Government ruling that mineral water treatments would no longer be covered by insurance. However, the Elms has endured its many challenges and fully restored to its original grandeur; it continues to host hundreds of guests every year.

The Elms has hosted several famous guests throughout the years, including President Harry Truman and Al Capone, mentioned above, and others such as oil magnate Harry Sinclair, artist Thomas Hart Benton, and TV personality Dave Garroway.

The Elms is a significant landmark in Excelsior Springs and is currently listed in the National Register of Historic Places. Located south of Elms Boulevard and Regent Avenue, the Elms Hotel complex is surrounded by lushly planted acreage, with walking trails shaded by mature trees and flanked by stone walls in some areas. A tennis court and ruins of a stone garage are southwest of the hotel and are reached by a pedestrian bridge. The Fishing River runs along the eastern edge of the property. The old pump house now houses a gift shop.

The Elms features 152 guest rooms and suites, more than 11,000 square feet of meeting space, including the 3,900-square-foot Elms Ballroom, a 42-seat amphitheater, a stone carriage house, and a 20-person boardroom. Amenities include two restaurants, two lounges, a 10,000-square-foot spa, an indoor European swim track, an indoor banked jogging track, a fitness room, an outdoor pool, a challenge course, a walking trail, and a professional volleyball court. 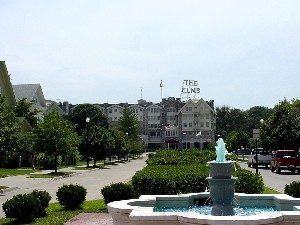 Like many historic hotels, the Elms is also said to play host to a couple of unearthly guests. The lap pool in the basement is said to be haunted by a man traced back to the hotel’s “speakeasy” days. During prohibition, the gangsters stored their liquor and held their all-night gambling parties in these blocked-off rooms. The spirit is said to be that of a man killed by the mob during one of these illegal drinking events.

Reportedly, the hotel, staff, and guests alike have often seen a maid wearing a 1920s style uniform on the third floor. Seemingly, she is extremely benevolent and only there to watch today’s housekeeping staff to ensure that they are doing their work correctly.

Another spirit is said to be a woman who walks through the hotel looking for her child. Distressed, she has been known to pull people’s hair or throw things across the room.

Both guests and staff report the feeling of an unearthly presence in several areas throughout the old hotel, as well as unexplained noises and the occasional glimpse at one of the three spirits.