The Fayette Historic Townsite near Garden, Michigan is a 19th Century, well preserved, company town, that manufactured charcoal pig iron and lime from 1867 to 1891.

In the mid-1800s, there was an enormous cost in shipping iron ore from Michigan’s Upper Peninsula to the foundries in the lower Great Lakes due to inefficient shipping. To resolve the issue, The Jackson Iron Company, led by company agent Fayette Brown, chose Lake Michigan’s Garden Peninsula at Snail Shell Harbor to establish a blast furnace close to mining, where the ore could be smelted into pig iron before being shipped to steel manufacturers.

Located on the southern side of the Upper Peninsula on Big Bay de Noc, Fayette was at its peak the most productive iron-smelting operation in the area. Shortly after the Civil War, the company town grew up around two very large blast furnaces, charcoal kilns, a lime kiln, and a large dock.

Rooms on the upper level of the furnace complex housed the machinery which powered the foundry’s hot blast. Boilers supplied the steam to blowing engines which forced air through the host blast ovens and into the furnaces. The furnace stacks were enlarged and modified over time. They used hardwood from the forest for fuel and quarried limestone from the bluffs in the harbor to purify the iron ore. Colliers (charcoal makers) made the fuel for the large furnaces and by the mid-1880s there were over eighty charcoal kilns in the area used by the company. In 1882 the company announced it would build a lime kiln to manufacture lime used in mortar for masonry, chinking for log houses and plaster for interior walls. The excess was sold to Escanaba.

About 500 residents lived in Fayette, most of them immigrants from Canada and northern Europe. During its peak in population, half were children. The laborers and skilled tradesman produced over 225,000 tons of pig iron during its 24 years of activity, with employee’s splitting up just over $5,000 in payroll each month from the Jackson Iron Company.

Stagecoaches linked Fayette with neighboring communities. Two livery businesses rented horses and buggies, while stage lines carried passengers to Garden, Manistique and Escanaba. The overland route to Escanaba took two days by stage, but only three hours by boat across Big Bay de Noc. In the winter, when the lake froze, residents could ride a stage sled across to Escanaba.

In 1870 a three-story warehouse was built next to a wood-frame store. Although Fayette shoppers were treated to “clearing sales”, mail order businesses and other competitors offered lower prices. One resident is quoted as saying “No matter how fairly it is managed, the company store is generally considered a “pluck me”. In 1886 the wood store was replaced, but the entire building was destroyed by fire in the 1900s, with only the stone walls remaining today. 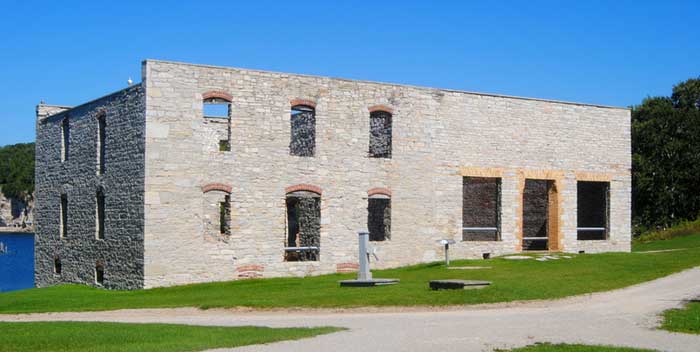 The remains of the company store and warehouse in Fayette Historic Townsite. Photo by Kathy Weiser-Alexander.

Fayette’s central business district separated the haves from have-nots’. Tradesmen and Supervisors along with their families lived in comfortable frame houses, while simple log homes were taken along the hill, road, and shoreline by the unskilled laboring class on the other side of town.

Slag Beach, right next to the unskilled laborers’ homes, was an industrial dumpsite, where glass-like slag, or cinder, mixed with iron can still be found. The Jackson Iron Company used the furnace waste product as a road base and fill material. The beach also served local residents as the landfill, as Fayette was not known for being a “tidy” town.

The town’s success would be short-lived though, as the company exhausted the area’s hardwoods. Then, the Jackson Iron Company closed its Fayette smelting operations in 1891 when the iron market declined. Although some residents stayed and farmed, many left Fayette.

Now in a State Historic Park, visitors can take a walking tour of 20 original structures, including eleven buildings with museum displays and plenty of scenic views of this harbor town of yesteryear.  We found this historic site to be well worth the price of admission for a leisurely tour of Michigan history.