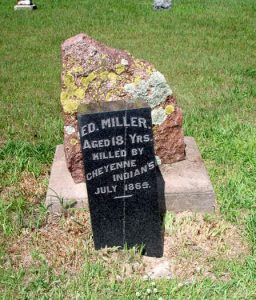 The historic Santa Fe Trail entered McPherson County, Kansas a little north of the middle at the eastern border and ranged southwesterly until it made its way to about two miles south of the town of McPherson.From there it ran almost due west, seeking the high ground between the Big Basin and the Chain Lakes, leaving the county in a northwesterly direction a little south of the middle of the western boundary.

Just east of Canton, the trail and bore slightly southwest. East of Canton, near the center of the Jones Cemetery is a black marble gravestone belonging to Ed Miller who, according to the inscription, was killed by Cheyenne Indians in 1864. Miller was an 18-year-old dispatch carrier for the government. He is thought to have been the last white man killed by Indians in this part of Kansas. Back-to-back with the gravestone is a stone Santa Fe Trail marker placed by the Daughters of the American Revolution in 1906 to mark the Santa Fe Trail.

Fuller’s Ranch, also known as Big Turkey Ranch, provided accommodations for travelers on the Santa Fe Trail and was probably the first white settlement in McPherson County. Fuller operated the ranch until around 1865. A post office named Big Turkey was located in the bend of the creek. A monument to commemorate the site is one mile east of Galva on highway 56 and 2 miles south on 22nd Avenue.

The route continued, passing out of the county a few miles south of the town of Windom. 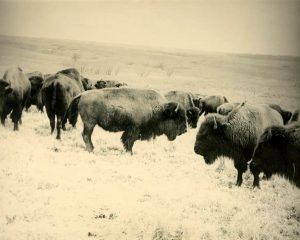