Mackinac Island from Round Island, Michigan by Detroit Publishing, 1899

This island, lying at the eastern edge of the Straits of Mackinac, is of outstanding significance in the history of the old Northwest and the advance of the frontier. Possessed at various times by France, Britain, and the United States, it was the center of the thriving Great Lakes fur trade and the site of key military outposts in the 17th, 18th, and 19th centuries. The Great Lakes and their related waterways were the main routes into the continent for the French, the first Europeans to penetrate them, who quickly recognized the strategic importance of the control of the straits—the connecting link between Lakes Huron, Superior, and Michigan. Possession of the straits ensured French dominance of the American heartland. The Mackinac fur trade was the lifeblood of New France, the main livelihood of British Canada, and for a while, of considerable economic importance to the United States. Mackinac Island was a rendezvous point for the French explorers and traders who probed eastward and southward from the Great Lakes and a key trading and military post for the British. In the first part of the 19th century, it was a major military outpost on the U.S. frontier and the heart of John Jacob Astor’s fur empire.

In 1671 Jesuit Fathers Claude Dablon and Jacques Marquette arrived at the straits and planted a mission settlement on Mackinac Island, the first in the region, replacing one founded some 3 years earlier farther west, on Lake Superior’s Chequamegon Bay. The following year they moved the settlement to the site of the city of St. Ignace, on the mainland on the north side of the straits. In 1698 the French abandoned the straits for a few years but soon returned and erected Fort Michilimackinac on the southern mainland at the site of Mackinaw City. The British occupied the post in 1761, after the collapse of New France, and stayed until the end of the War for Independence. In 1781, threatened by George Rogers Clark’s U.S. forces, they transferred their post to Mackinac Island, where they began construction of an elaborate fortification. This fort was not complete when, in 1796, the island passed to the United States under the terms of Jay’s Treaty (1794). At the outbreak of the War of 1812, the British recaptured the straits, and they did not revert to the United States until the end of the war, by the Treaty of Ghent.

After the war, the U.S. fur trade in the old Northwest centered in the straits area. Subsequent to the failure of his Astoria enterprise, in the Pacific Northwest, John Jacob Astor had focused his efforts in the Great Lakes and Mississippi Valley regions. Just before the end of the War of 1812, he organized the American Fur Company to compete with the British and set up the company headquarters on Mackinac Island. Foreign traders were by then banned from the fur trade on U.S. soil, and the trade flourished until about 1830. By that time the fur trade had moved farther west, and the straits declined in strategic importance. In 1834 Astor sold his interests.

In the latter part of the 19th century, the island became a popular summer resort. In 1857 it became a national park. In 1895, however, the Federal Government turned it over to the State of Michigan for development as a State Park. 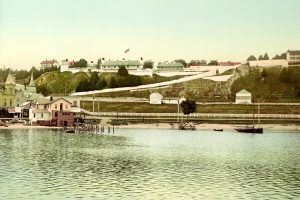 Mackinac Island and nearby St. Ignace Mission and Fort Michilimackinac are unsurpassed in their preservation of the dramatic history of the old Northwest. Each site has considerable individual significance; in combination, they constitute a record of virtually every aspect of white occupation of a key point on the North American Continent. Most of the island, including practically all the historical features, is State-owned. The State preserves the remains of Fort Mackinac, the U.S. fort on the island, including barracks, officers’ quarters, and related buildings; the reconstructed Beaumont Memorial House, a stone structure, built by the British North West Company and used by Astor as a retail store; the Biddle House, the oldest on the island; the 1936 reconstruction of Fort Holmes, the British fort at the time of the War of 1812; and other sites. The city of Mackinac preserves the surviving American Fur Company buildings, including the Fur Warehouse (1810) and the restored Agency House (1817), whose first floor reflects the period 1817-50 and second floor the period 1871-1900.

Mackinac County, in Lake Huron, is about three miles east of the southeastern tip of the Upper Peninsula of Michigan, accessible by ferry.

Compiled and updated by Kathy Alexander/Legends of America, updated July 2020.