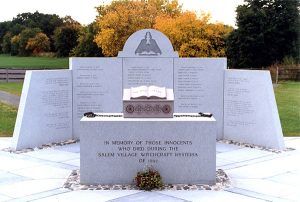 On May 9, 1992, the Salem Village Witchcraft Victims’ Memorial was dedicated in Danvers, Massachusetts.

O Christian Martyr Who for Truth could die
When all about thee Owned the hideous lie!
The world, redeemed from superstition’s sway,
Is breathing freer for thy sake today.

The last Salem witch trial was held in May 1693; but, for those who had been accused, as well as their families, their lives would forever be changed. Even though Governor William Phips had pardoned all the remaining accused in 1693, the fact that they had been accused would never be forgotten by their neighbors. And, for those who had actually been convicted, it was even worse. Though they were free, they were still considered, in the eyes of law, as “dead”, meaning they had no rights of recourse, nor claim to any property they may have previously owned. This was the case in the life of Elizabeth Bassett Proctor, who had been convicted the previous year of witchcraft. Her husband, John Proctor was hanged, and Elizabeth was only spared because she was pregnant. However, by the time she gave birth to her child, the hysteria had ended and she was later released. But, she had no home to return to, as all of the possessions of her and her husband had been seized. She and her children were impoverished. Though she would take her complaints to the courts, her pleas would go unheard because, in the eyes of the law, she was considered a “dead woman.” She would eventually prevail, but, not before living for several years in turmoil. 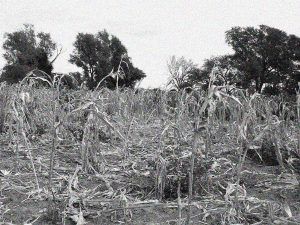 Others, who were pardoned, were forced to remain in jail because they couldn’t afford to pay the bill that was owed for their imprisonment, which included everything from room and board, to the price of their shackles. While waiting, one woman — Lydia Dustin would die, and two more would indenture themselves before they were set free. Numerous more would, like Elizabeth Proctor, return to homes where all their possessions had been confiscated, their fields were untended, and their crops dead.

Further adding to their turmoil was the fact that the accusers and judges showed little remorse for their actions. Instead, they placed the blame on the “trickery of Satan,” thus, freeing themselves from any sense of guilt. Jurors and townspeople also managed to maintain a clear conscience by claiming that, after all, many victims had confessed to their “crimes” and that Salem Village had been tricked by the devil. The communities expected that those who had lost loved ones and property to go on with their lives as if nothing had happened. In the meantime, the formerly accused witch would spend years trying to regain their property and their rights as individuals.

However, over the years, things would slowly begin to change. While some would eventually make formal apologies, others would only hint at any guilt. The Reverend Samuel Parris of Salem Village conceded errors of judgment, but, mostly shifted blame to others. In jeopardy of losing his job, he made a “Meditation for Peace” sermon, admitting that he gave too much weight to the spectral evidence. However, this would not be enough for the villagers and he was eventually replaced by Thomas Green, who devoted his career to putting his torn congregation back together. Governor William Phips blamed the entire affair on William Stoughton, who would refused to apologize or explain himself, and criticized Governor William Phips for interfering just when he was about to “clear the land” of witches. Stoughton’s refusal to take any blame; however, would not hurt him, as he would become the next governor of Massachusetts. Eventually, a few judges hinted at apologies for their roles in the trials, but, would never assume any real guilt.

Salem’s politics were altered also. The Essex County Court declared that the Salem Village committee was derelict, dismissed them and replaced them with an anti-Parris committee.

January 14, 1697, the Massachusetts General Court declared a day of fasting and reflection for the Salem witch trials. Samuel Sewell, one of the judges of the Court of Oyer and Terminer, wrote the proclamation and made a public confession of his own guilt. Afterward, he set aside one day every year to fast and pray for forgiveness for his part in the trials. This would continue until he died in 1730.

On that same date, 12 jurors, who had served in the witch trials, signed a Declaration of Regret asking forgiveness for the error of their judgment.

“We whose names are under-written, being in the year 1692 called to serve as jurors in court at Salem, on trial of many who were by some suspected guilty of doing acts of witchcraft upon the bodies of sundry persons, we confess that we ourselves were not capable to understand, nor able to withstand, the mysterious delusions of the powers of darkness and Prince of the air, but were, for want of knowledge in ourselves and better information from others, prevailed with to take with such evidence against the accused, as, on further consideration and better information, we justly fear was insufficient for the touching the lives of any (Deut. XVII) whereby we fear we have been instrumental, with others, though ignorantly and unwittingly, to bring upon ourselves and this people of the Lord the guilt of innocent blood; which sin the Lord saith in Scripture he would not pardon (2 Kings XXIV 4)–that is, we suppose, in regard to his temporal judgments. We do therefore hereby signify to all in general, and to the surviving sufferers in special, our deep sense of, and sorrow for, our errors in acting on such evidence to the condemning of any person; and do hereby declare, that we justly fear that we were sadly deluded and mistaken–for which we are much disquieted and distressed in our minds and do therefore humbly beg forgiveness, first of God, for Christ’s sake, for this our error, and pray that God would impute the guilt of it to ourselves nor others, and we also pray that we may be considered candidly and aright by the living sufferers, as being then under a strong and general delusion, utterly unacquainted with, and not experienced in, matters of that nature.

We do hereby ask forgiveness of you all, whom we have justly offended, and do declare, according to our present minds, we would none of us do such things again, on such grounds, for the whole world–praying you to accept of this in way of satisfaction for our offense, and that you would bless the inheritance of the Lord, that he may be entreated for the land.”

Various petitions were filed between 1700 and 1703 with the Massachusetts government, demanding that the convictions be formally reversed. With the convictions still on the books, those not executed still had a “record” and were vulnerable to further accusations. In 1711, the Massachusetts legislature passed a general amnesty that exonerated all but six of the accused witches. That same year, the courts of Massachusetts Bay Colony began to make monetary restitution to the families of those who were jailed. 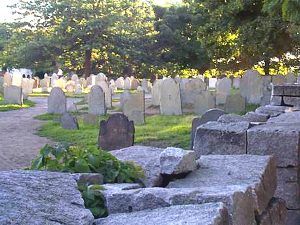 In 1957, the State of Massachusetts formally apologized for the events of 1692. Further, the legislature passed a resolution exonerating Ann Pudeator, who had been hanged.

On May 9, 1992, the Salem Village Witchcraft Victims’ Memorial of Danvers was dedicated before an audience of over 3,000 people. It was the first such Memorial to honor all of the 1692 witchcraft victims and is located across the street from the site of the original Salem Village Meeting House where many of the witch examinations took place. That same year, another memorial was dedicated in August in Salem. It consists of 20 granite benches near the Old Burying Point. The benches are inscribed with the name of the accused and the means and date of execution.

Finally, on November 1, 2001, acting Massachusetts Governor Jane Swift approved a bill that cleared all the accused witches hanged in Salem in 1692 and exonerated the final five who had not been cleared by the previous amnesty resolutions — Susannah Martin, Bridget Bishop, Alice Parker, Margaret Scott, and Wilmot Redd.

After the Salem Witch Trials ended, not a single person was ever executed in America for having been convicted of witchcraft.