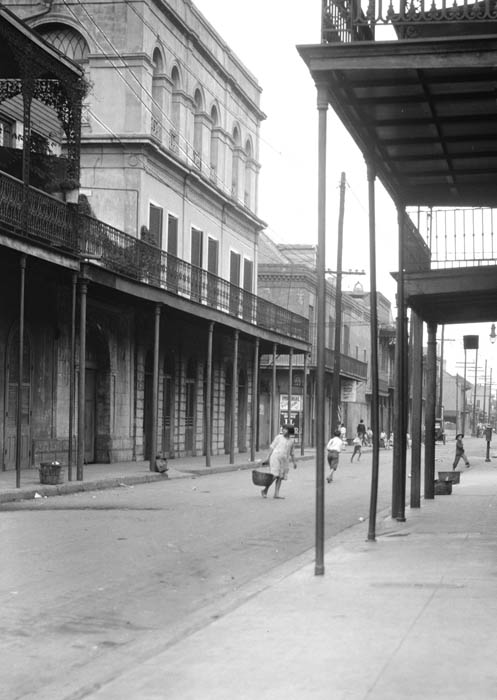 Looking down Royal Street at LaLaurie Mansion (middle left) by Arnold Genthe about 1923.

The LaLaurie Mansion at 1140 Royal Street in the French Quarter of New Orleans, Louisiana is said to be one of the most haunted places in what is called the most haunted city in the United States. If, in fact, this building does house some ghostly entities, it comes as no surprise because of the property’s history of brutality.

“The conflagration at the house occupied by the woman LaLaurie… is like discovering one of those atrocities the details of which seem to be too incredible for human belief.”

Madame Delphine MacCarthy LaLaurie was a wealthy New Orleans socialite and notorious enslaver. She and her husband Dr. Leonard Louis Nicolas LaLaurie bought the property in 1831 from Edmond Soniat Dufossat, which included a house already under construction, and he finished it for them. In 1832, the two-story mansion was completed with attached slave quarters.

Marie Delphine Macarty or MacCarthy was born on March 19, 1787, in New Orleans during the Spanish Colonial period. She was one of five children born to Louis Barthelemy de McCarty (originally Chevalier de MacCarthy) and Marie-Jeanne L’Érable, both of whom were prominent in the New Orleans’ European Creole community. 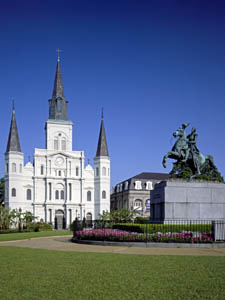 When she grew up, she married Don Ramón de Lopez y Angulo, a high-ranking Spanish royal officer, at the Saint Louis Cathedral in New Orleans on On June 11, 1800.

In 1804, after the United States had acquired the territory in the Louisiana Purchase, Don Ramon was called back to Spain. When he and Delphine, who was pregnant, stopped in Cuba, Don Ramón died suddenly. A few days later, Delphine gave birth to a daughter and soon returned to New Orleans.

In June 1808, Delphine married Jean Blanque, a prominent banker, merchant, lawyer, and legislator. The couple would eventually have four children. But, Jean Blanque died in 1816.

On June 25, 1825, Delphine married her third husband, physician Leonard Louis Nicolas LaLaurie, who was much younger than her. The couple had two daughters. In 1831, she bought the property at 1140 Royal Street, which she managed in her own name with little involvement of her husband. The two-story mansion was finished the next year, complete with beautiful chandeliers, intricate carvings, and wrought iron balustrades. Here, she maintained a central position in New Orleans society hosting lavish parties for other socialites who enjoyed fine food and champagne.

However, the marriage began to have problems, and in November 1832, Delphine petitioned the court for a separation claiming that Dr. LaLaurie had “treated her in such a manner as to render thier living together unsupportable”, claims which her son and two of her daughters by Jean Blanque confirmed. 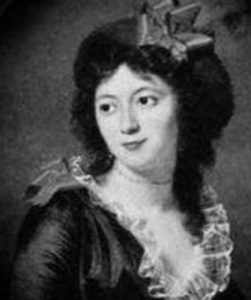 At about the same time, rumors began to swirl about Delphine LaLaurie’s poor treatment of her slaves as many reported them to look “haggard and wretched.” However, when in public, Delphine LaLaurie was generally polite to black people and solicitous of her slaves’ health. But, the rumors continued, and finally, the reports were sufficiently widespread that a local lawyer was dispatched to Royal Street in 1832 to remind LaLaurie of the laws for the upkeep of slaves. However, during his visit, the lawyer found no evidence of wrongdoing or mistreatment by LaLaurie. Madame LaLaurie paid for legal services and sold a number of enslaved people following the investigation.

As word spread, other socialites were no longer eager to participate in their social events or interact with the LaLaurie family.

After the lawyer’s visit, a neighbor reported that one of Delphine’s slaves, a girl of about ten years, fell to her death from the roof of the Royal Street mansion while trying to avoid punishment from a whip-wielding LaLaurie. The girl, whose name was Lia, was buried on the mansion grounds. Allegedly, this incident led to an investigation of the LaLauries, who were found guilty of illegal cruelty and were forced to forfeit nine slaves. The slaves were later returned to the LaLaurie mansion.

Other stories said that LaLaurie kept her cook chained to the kitchen stove and when her daughters attempted to feed the slaves, she beat them as well. This could be the reason that several people reported that Madame LaLaurie’s daughters seemed very quiet and very pale. 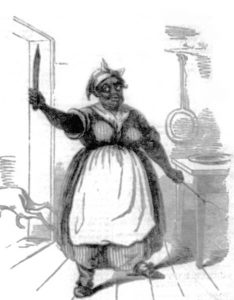 Funeral registers between 1830 and 1834 document the deaths of 12 slaves at the Royal Street mansion, although the causes of death were not mentioned. These deaths included a cook and laundress named Bonne and her four children. Court records also show that LaLaurie freed two of her slaves — one named Jean Louis in 1819 and another called Devince in 1832.

On April 10, 1834, a fire broke out at the LaLaurie mansion. When the police and firefighters got there, they found that the blaze had started in the kitchen, where they discovered the 70-year-old cook chained to the stove by her ankle. Later, she told authorities that she had set the fire as a suicide attempt because she feared being punished. She also told them that when slaves were taken to the uppermost room that they never came back.

Though the LaLauries were separated, Dr. LaLaurie was present at the Royal Street house on the day of the fire.

Bystanders responding to the fire attempted to enter the slave quarters to ensure that everyone had been evacuated. When the McLauries refused to give them the keys, the bystanders broke down the doors to the slave quarters and found “seven slaves, more or less horribly mutilated… suspended by the neck, with their limbs apparently stretched and torn from one extremity to the other,” who claimed to have been imprisoned there for some months. Others said that the slaves were emaciated, showed signs of being flayed with a whip, were bound in restrictive postures and wore spiked iron collars. Rumors also abounded that dead bodies were found in the attic with their corpses mutilated beyond recognition. 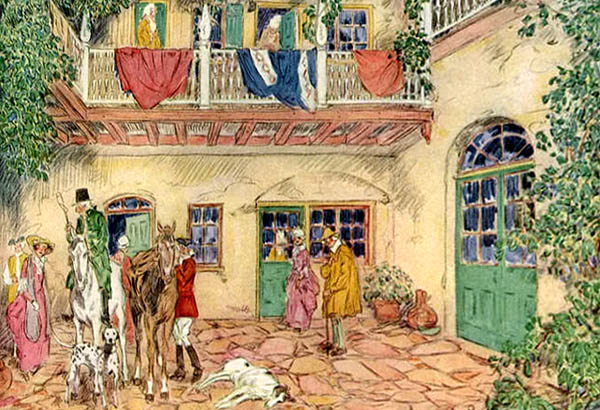 Judge Jean-Francois Canonge was one of the bystanders that entered the mansion and said he had found a “negress… wearing an iron collar” and “an old negro woman who had received a very deep wound on her head [who was] too weak to be able to walk.” He also said that when he questioned LaLaurie’s husband about the slaves, he was told in an insolent manner that “some people had better stay at home rather than come to others’ houses to dictate laws and meddle with other people’s business.”

“Upon entering one of the apartments, the most appalling spectacle met their eyes. Seven slaves more or less horribly mutilated were seen suspended by the neck, with their limbs apparently stretched and torn from one extremity to the other… These slaves were the property of the demon, in the shape of a woman… They had been confined by her for several months in the situation from which they had thus providentially been rescued and had been merely kept in existence to prolong their suffering and to make them taste all that the most refined cruelty could inflict.”

As the news of the abused slaves became widely known, a mob of local citizens attacked the LaLaurie residence and “demolished and destroyed everything upon which they could lay their hands”. By the time a sheriff and his officers tried to disperse the crowd the property had sustained major damage, with little left but the walls. The slaves were then taken to the Cabildo, where they were available for public viewing. The New Orleans Bee reported that by April 12th up to 4,000 people had attended to view the slaves “to convince themselves of their sufferings.”

Investigators later found several bodies, including a child, buried throughout the mansion grounds. 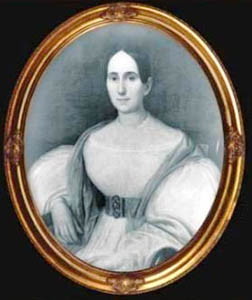 Several weeks later, the New Orleans Advertiser claimed that two of the slaves found in the mansion had died since their rescue. It stated, “We understand… that in digging the yard, bodies have been disinterred, and the condemned well, having been uncovered, others, particularly that of a child, were found.”

In the meantime, the LaLauries had fled in a fast-moving carriage, first to Mobile, Alabama, and then to Paris, France where Delphine LaLaurie lived out the rest of her life before she died in 1849, at the age of 62.

The burned-out mansion with its gaping windows and empty walls continued to stand in its ruined state for another four years. In 1838, the property was bought by Charles Caffin and rebuilt by Pierre Trastour in the Empire style.

A third floor and a rear building were added in the 19th century and at three stories high, it was described in 1928 as “the highest building for squares around.”

In the following decades, the building was used for different purposes including as a public high school, a music conservatory, an apartment building, a refuge for young delinquents, a bar, and a furniture store. 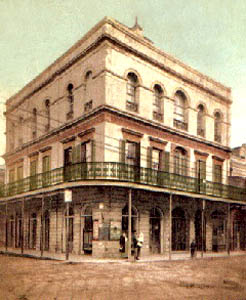 In April 2007, the house was purchased by actor Nicolas Cage for $3.45 million. However, this was at about the same time that Cage began to suffer from financial difficulties and just two years later the property was listed for auction as a result of foreclosure.

Privately owned today, the entrance to the building bears a baroque facade with iron grillwork on its balconies. Inside, the vestibule is floored in black and white marble, and a curved mahogany-railed staircase runs the full three stories of the building. The second floor holds three large drawing rooms connected by ornamented sliding doors, whose walls are decorated with plaster rosettes, carved woodwork, black marble mantle pieces, and fluted pilasters.

Though today’s building is not the very same one that LaLaurie lived in and cannot be toured, it is a highlight of many New Orleans ghost tours due to its tragic history and tales of being haunted.

Folk histories of its haunting began soon after LaLaurie disappeared from New Orleans, at which time people claimed to hear the phantom screams of her victims spilling from the house in the dead of night.

The stories continued into the next decades describing the property as being haunted by the victims of the socialite serial killer. The tales say that wails of agony plague its rooms at night, doors slam, faucets suddenly turn on, and furniture moves on its own. Body imprints are found on beds that no one has slept on. Apparitions of slaves, some wearing chains, have been seen walking around the property.

The ghost of Madame LaLaurie herself doesn’t appear on the property but has allegedly been seen at the nearby St. Louis cemetery, where she once worshipped.

The mansion and its history have been featured in numerous books and on several ghost adventure television shows. A fictionalized version of LaLaurie appeared in American Horror Story: Coven, played by Oscar-winner Kathy Bates. Most recent plans include that the LaLaurie Mansion will become a central figure in The Conjuring horror franchise. 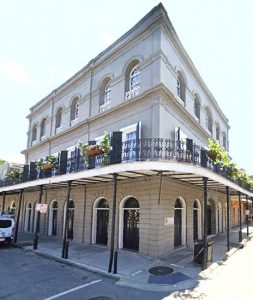 Today thousands of tourists travel to the city every year to visit this property and others in what is said to be the most haunted city in the United States.

The building stands at the corner of Royal and Governor Nicholls Streets.