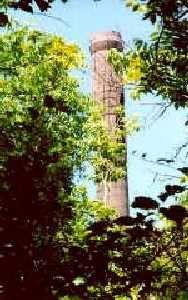 LeHunt,  Kansas was once a small town supported primarily by the United Kansas Portland Cement Company. Little is left of the town beyond a few old ruins of the cement plant and an old cemetery. Once a thriving community, now the town can only be discerned from overgrown avenues of trees, broken sidewalks and foundations hidden by grass and heavy brush.

In the 1920s the concrete factory was a thriving business but with the advent of the Great Depression, it shut its doors and the small town died with the plant.

The concrete plant lies about ½ miles to the west of what remains of the old town and can only be reached by hiking through the underbrush and we’ve been told it’s now fenced off. While trees and weeds try to choke out where the town’s cement plant once stood, the walls, ovens and giant smokestack of the factory are still remarkably intact.

The old cemetery lies about ½ mile north of the factory site, with graves dating back to the late 1860s.

The old site of the cement plant is said to be haunted by the ghost of one of the workers by the name of Bohr, who died in a tragic accident at the plant. As the story goes, Bohr fell into a vat of concrete and his body was never recovered. After this disastrous event, his co-workers embedded his wheelbarrow, pick and shovel into a wall of concrete that was under construction at the time. His name, as well as his pickaxe, can still be seen at the factory ruins. 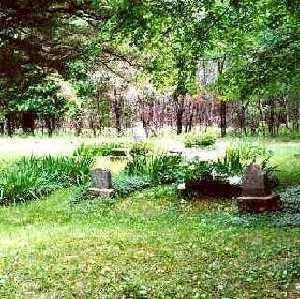 With the aid of a sturdy vehicle, visitors can make their way down the rutty, dirt paths. LeHunt is located northwest of Independence, immediately east of Elk Reservoir in Montgomery County, Kansas

The old town lies on a bend in the hard-surfaced road and where a few houses exist. The concrete factory is about ½ mile to the west of what remains of LeHunt.

From Independence take US-75/US-160 west .2 miles and turn right on Peter Pan Road traveling north for two miles. The road will change to county road 3525 and you will continue for one mile. then take a left on 5000 Road for ½  mile.