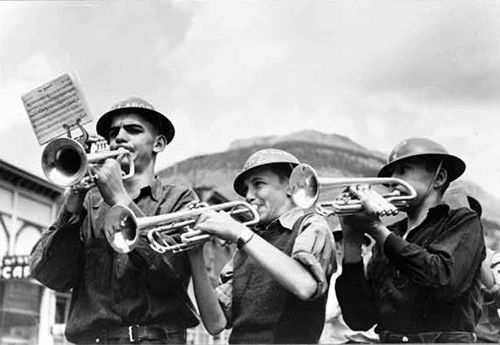 Celebration in a mining camp

The Glorious Fourth of July has come and gone again, and as one reflects over the fact that older people have had the opportunity of celebrating every one during half the lifetime of the nation, it seems yet as young as a new world, and with more promise than any of the old. Among the new of the old States, Nevada seems young, yet many pioneers have celebrated for a quarter of a century or more within her borders. Still, it will puzzle most of the roving, restless and adventurous spirits to recall where they were during each of the celebrations since making this their home.

Most of us took no note of the time and entered into the spirit of the day with a feeling that was usually gauged by our environments or checked by the scarceness in our purse and yet, nearly everybody enthuses on the Fourth of July the same as they do when an election comes around. Nearly everyone derives satisfaction at the sight of the starry emblem that represents his country. This nation is admired worldwide and possessing strength sufficient to command respect from those that envy it.

In the lifetime this writer has spent in the sagebrush, it is interesting to recall these celebrations. The first was in the last and fiercest year of the war when news came slowly on the Overland Stage, and all we had to cheer us was the grim message from Grant. The little mining camp had representatives from all sections, and while the undercurrent of feeling was intense, a spirit of mutual forbearance seemed to possess all alike. The few flags that floated from saloon staffs told us the country was not yet dismembered. The only demonstrations were the gatherings in congenial groups, where some indulged in songs led by that lover of melody, genial Dan Morgan. We discussed statehood then and ways for inducing capital from the east to invest in our mines, mill sites, wood ranches, and the natural meadowlands of the Reese River Valley. Then, in 1865, a year later, we celebrated in Austin. The mines were yielding, and the eastern capital was building mills, and money was easy for all who worked. In 1866 we observed the day in rock-ribbed Ophir Canyon, where the operations of the Twin River S.M. Co. furnished occupation and a living to some 500 laborers, miners, and mill men. We had no orator nor poet, but flags floated; a general holiday was indulged in, and the canyon echoed with a song led by that old stalwart Billy Smith, now the U.S. Postmaster of Eureka, and his brothers, in a melodious voice that rings in memory yet. The celebration was a success, but we all went hungry the next day, for all the cooks got drunk and rations were short until they sobered up. 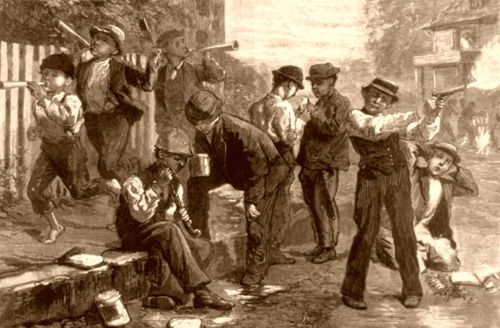 In 1867 we all celebrated in Ophir again, much in the same style, winding up with a stag dance, for there weren’t but three white women in camp. In 1868, everybody celebrated in Austin, and, to accommodate all, instead of one procession, we had two in the forenoon, another in the afternoon. The first was intensely partisan, one being led by Major Bradley and the other by Major Sherman, and each was elaborate and imposing, made so by all the means at command and regardless of expense. Party feeling was intense, angry looks were on every face, and when the two processions countermarched past each other, the moment was fraught with critical interest. Each held its literary exercises separate and apart from the other, but sober counsels prevailed, and no conflict occurred. A happy inspiration took possession of representative men’s minds, who, to placate the bitter feeling of the factions, suggested a burlesque parade for the afternoon. The proposition took like wildfire; everybody was in for it; the news spread rapidly, and by 4 p.m., the procession formed and all those in the rival processions of the forenoon joined in making the afternoon parade the opportunity for fraternizing in a devil-may-care spirit of brotherly love that was infectious and contagious.

For it was immense, the immense procession burlesqued everything contained in the two former, and each new and comical feature as it passed was cheered with the wildest mirth by the spectators that swarmed on the sidewalks. And, when the roundup was made in front of the National Bank and the reader, poet, orator, and president, all in masks, were, however, recognized by their voices and manners. The crowd discovered that they included such prominent men as Judge W.H. Beatty, Colonel Harry I. Thornton, John Dennis, Judge John H. Boalt, Mayor J.S. Slanson, the Honorable Tom Wren and others, then and since then, known to fame, the jollity spread and swept away every vestige of the ill-feeling that marked the commencement of the day. 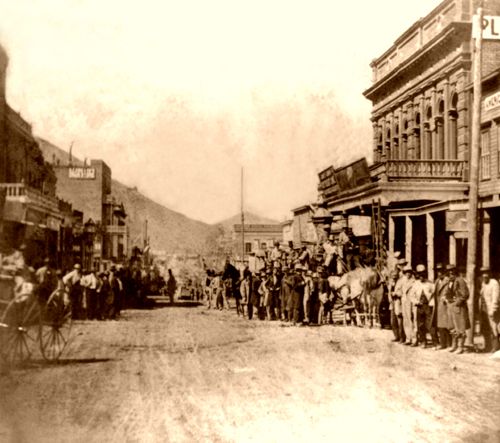 A circus was in town, a little one-horse affair that had wandered across on the Sand Springs road from Virginia City, and entertained the people of Austin every night for a week and with an afternoon matinee, until everybody was cloyed with the spangles and gauzy skirts, the clown and the sawdust. But that, the last night of the season, saw the tent again crowded from the simple announcement made by John Dennis from the platform of the burlesque Fourth of July speakers, which was given at the close of the exercises, and which was in effect, that there would be, among the other attractions of the mammoth acrobatic and arenic aggregation, a tight rope performance by the brothers — Majors Bradley and Sherman. And so ended one of the most remarkable celebrations that ever occurred in Nevada. Never afterward has partisan feeling interfered with the proper observance of this anniversary — the dearest of all to the American people.