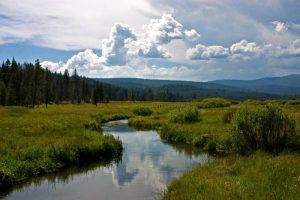 In the mid 1850’s prospectors were roaming the mountains and creeks of Siskiyou County along the northern boundary of California in search of their fortunes. Gold had been found in Humbug Creek as early as May 1851 but a group of disillusioned miners dubbed the place as “humbug” when they failed to find any of the precious metal. However, that did not stop other prospectors from looking and a few years later when another group hit pay dirt, hundreds of miners flooded into what would be called the Humbug Mining District. Soon, a mining camp was formed along the banks of Humbug Creek called Humbug City.

It is near here that the legend of the Lost Humbug Creek Mine began. When a man who was working for one of the Humbug District mines began to feel ill, he started to Yreka, some ten miles to the southeast to see a doctor. Shortly after coming upon the Deadwood Trail, he began to feel so ill that he lay down beneath a tree. As he looked around, he spied a promising piece of quartz float, and exploring further he found an entire outcropping.

Suddenly feeling better, he traveled some three or four miles back to his cabin, returning with a pick and shovel. He soon took out a sack full of gold that was estimated to have been worth $5,000 to $7,000. Excited to share the news, he soon traveled to Hawkinsville, where his parents and two brothers lived. Afterward, he returned to the site for more gold, when he began to feel sick once again. Leaving his pick and shovel, and covering the site with brush, he went to the county hospital where he died a week later.

Search as they might, his family was never able to find the site of their dead brother’s gold. The outcropping is said to be on the west side of the Humbug Mountains.