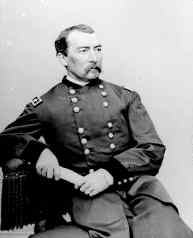 In 1887 over 600 acres along Lake Michigan in Highwood, Illinois, was purchased by the Commercial Club of Chicago. The organization then donated the land to the federal government hoping that the army would use it to create a military post near the city. Since the great labor strikes of 1877, members of the Commercial Club had supported the use of the army as a national police force for the protection of property and the suppression of unrest. After the Haymarket Riot of 1886, Commercial Club members were more determined to bring a U.S. Army post to the city to have troops available immediately if needed.

Fully supporting this plan was General Philip H. Sheridan. Though western senators objected to the new post because their local forts were being closed down, Congress accepted the gift, and construction began in the spring of 1888. Soon afterward, President Grover Cleveland named the post in honor of General Sheridan.

The plan for the fort was a large semi-circular central parade ground surrounded by post buildings. Along the south side of the parade was a massive 227-foot tall central tower flanked by two multi-company barracks. Officer’s quarters lined the remaining semi-circle and branched out on the northeast side toward the lake. A large hospital was located on the southeast side of the post, and the cavalry stables were located on the southwest side behind the barracks. Some 64 brick buildings were constructed with cream-colored bricks made from clay found in local bluffs in the next years.

The post was first garrisoned by infantry troops in 1887 but became a cavalry post in 1892. Two years later, troops from Fort Sheridan responded to the only labor unrest during the Pullman strikes of 1894. 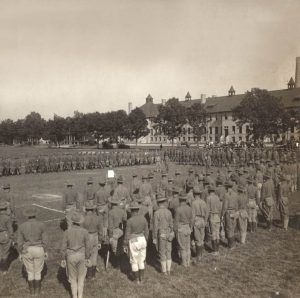 In 1898, Fort Sheridan became a mobilization, training, and administrative center during the Spanish American War and continued to house these functions through World War II.

During World War I, Fort Sheridan served as an induction and training center for the midwest region, and the post was expanded with the addition of many temporary buildings. The post also housed an Officer training camp. After the war, the post was used as a rehabilitation hospital for returning soldiers and as an isolation hospital for the Flu Pandemic of 1918. Between 1918 and 1920, some 60,000 patients were treated at the hospital.

The post housed Camp Leonard Wood, a Civilian Military Training Camp, between 1926 and 1939, which provided civilians with military officer training for any future conflicts. This camp was largely a tent camp with temporary support buildings.

Fort Sheridan again became a regional induction and training center even before the United States entered War War II in 1941. Once again, the post expanded with temporary buildings to handle the additional troops. During these years, over 500,000 men and women were processed through military service at Fort Sheridan. As the war progressed, it also became the regional headquarters for prisoner of war camps and housed prisoners of war on the post.

Fort Sheridan again became a regional induction and training center during the Korean War and the Vietnam War. In 1950 an Army Air Field was built on the post, which was named Haley Army Airfield. In 1954, during the Cold War, Fort Sheridan became the regional NIKE missile headquarters for the Chicago Air Defense area and a NIKE missile launch site from 1955 to 1963. 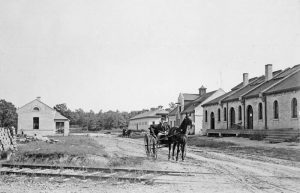 After 1973 the post again housed administrative and logistical support services, and in 1974 the post transitioned into a Reserve and National Guard unit. In 1984 parts of Fort Sheridan were designated a National Historic Landmark District. The historic district includes 230 acres and 94 buildings along the shore of Lake Michigan. The buildings include officers’ quarters, barracks, stables, a drill hall, a water tower, and institutional buildings. The 54-acre parade ground was preserved as an open space.

When Fort Sheridan was among those slated for closure in1989, residents of the area formed the Fort Sheridan Joint Planning Commission to develop a reuse plan. In May 1993, the army post was closed. However, the Army retained about 90 acres of the land for the Reserve and National Guard.

Afterward, the majority of the property was sold to commercial land developers. Then many of the original housing structures were refurbished and resold, and other buildings were given to cultural organizations. The remaining property was divided between a golf course and various commercial and residential developments. Today, most of the open spaces, including the central parade ground and the old Army Air Field, are a part of the Fort Sheridan Forest Preserve. The old post cemetery at the north end of the post is still administered by the U.S. Army and maintained by the Fort Sheridan Forest Preserve. 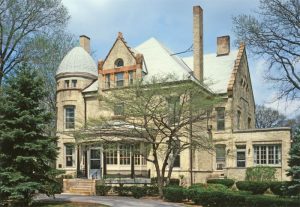