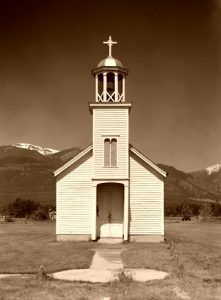 Fort Owen, Montana is situated on the site of the first permanent white settlement in Montana.

In 1841, Father Pierre DeSmet came to the area and established St. Mary’s Mission among the Flathead Indians. By winter, several houses, a trading post, and shops were also constructed and the next spring, crops and gardens were planted. In 1942, Father Antonio Ravalli joined the mission and the end of that year, the priests had erected the first sawmill, first grist mill, and the first school in Montana as well.

In 1850, Major John Owen, an Indian trader, purchased St. Mary’s Mission and established a regional trading post and rest stop for fur trappers, traders, missionaries, and explorers. He later acted as an Indian agent. The fort, built of adobe and logs, also supported an extensive farming operation, sawmill, and gristmill. In 1860, Owen significantly upgraded the fort by replacing its wood stockade with adobe brick walls.

When Mullan Road opened in May 1864, it bypassed Fort Owen in favor or Hell Gate, Montana and Owen’s finances worsened. After his wife died in 1868, Owen also began to deteriorate. Fort Owen was sold at a sheriff’s auction in 1872 to Washington J. McCormick, to whom Owen owed money.

McCormick continued to operate the saw and grist mills at the site until his death in 1889. Afterward, the property changed hands several times before it was donated the Stevensville Historical Society. The historical society, in turn, donated what little remained of the fort to the state of Montana in 1937.

Today, the site is a Montana State Park located in Stevensville, Montana. The park, listed on the National Register of Historic Places, features the original 1841 restored chapel, a cabin that now serves as a museum, barracks, and several other buildings on the one-acre site. The park is 25 miles south of Missoula on U.S. 93 to Stevensville Junction, then .5 miles east on Secondary 269.