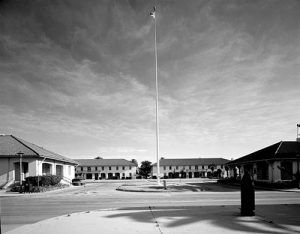 Additional land was purchased in 1897 and 1910, and Fort MacArthur was formally created on October 31, 1914, and named for General Arthur MacArthur, Jr. During World War I, the fort was utilized as a training center and the first large gun batteries for harbor defense were installed in 1917. However, the test firings of these guns were extremely unpopular with area residents and by the end of World War II, the large guns were already being removed.

During the early years of the Cold War, the post became a key part of the west coast’s antiaircraft defenses and the home of the 47th Anti-Aircraft Artillery Brigade. A Nike surface-to-air missile battery was activated at the fort in 1954, which remained in service until the early 1970s.

In 1975 Fort MacArthur became a sub-post of Fort Ord, and the  Upper and Lower Reservations were soon transferred ownership of the forts to the City of Los Angeles. The Upper Reservation is now the San Pedro’s Angels Gate Park, which is home to the Fort MacArthur Military Museum. The museum, housed in the Battery Osgood-Farley, preserves and interprets the history of Fort MacArthur and maintains several historic structures that were part of the U.S. Army’s role in the defense of the American continental coastline from invasion.

The Lower Reservation of Fort MacArthur was dredged and is now the city’s Cabrillo Marina. The Middle Reservation was transferred to the Air Force in 1982 and is still being used as base housing for the Los Angeles Air Force Base.