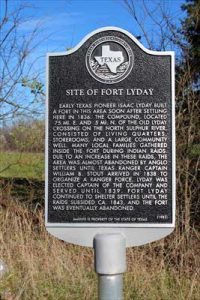 Fort Lyday, Texas, also known as Lyday’s Fort and Fort DeKalb, was a civilian fort built by Isaac Lyday in 1836.

The fortress was located about ¾ mile east and ½ mile north of Lyday’s Crossing on the North Sulphur River in the extreme southwest corner of present-day Lamar County. The fort, that covered about a quarter acre, was surrounded by a wooden palisade. Inside, were storerooms, living quarters, and a large well. Livestock was corralled outside the fortress, but could quickly be moved inside during times of threat.

The fort was garrisoned late in 1838 by the Red River County Rangers under the command of Captain William B. Stout, who made repairs and strengthened the fort. The post was involved in several skirmishes until 1943 when the Indian menace in the area had ended. Afterward, it deteriorated and nothing is left of it today.