Fort Lowell, Arizona, was part of a system of forts guarding southern Arizona during the years of Apache hostilities.

This fort served more as a supply depot and administrative center than a combat base. It occupied two sites; the first of which was little more than a tent city, established in May 1862 just east of Tucson by California Volunteers who had captured the town from the Confederates. In March 1873, the post was relocated seven miles northeast of town, where permanent adobe construction began. Its role encompassed escorting wagon trains, protecting settlers, guarding supplies, patrolling the border, and conducting offensive operations against the Western and Chiricahua Apache Indians. 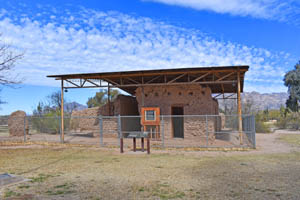 With the end of the Apache Wars, the army saw no further need for Fort Lowell, and in 1891 the post was abandoned.

From 1904 to 2009, the Santa Rita Hotel was located on the first site before being torn down and replaced with a high rise. However, the Arizona Historical Society and Pima County have maintained the second site. There are several noteworthy remains, including seven feet high ruins, the hospital, one cavalry, and two infantry barracks.

Now called Fort Lowell Park, the commanding officer’s house has been reconstructed, and it is furnished in period style, now housing a museum. Outside the park, about 200 yards to the west on Fort Lowell Road, is the sutler’s store, now a private residence; and three officers’ quarters, in varying condition, on privately owned land. Immediately to the east are the ruins of the guardhouse. Fort Lowell Park is located at the corner of Cracroft and Fort Lowell Road in northeastern Tucson.