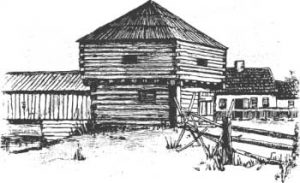 During the early years of the Republic of Texas, residents in what is now Fannin County lived in constant danger of Indian attacks and in the summer of 1837, a man named Bailey Inglish built a single blockhouse where settlers could take refuge.

Although the fort was private, it was used by the Army of the Republic of Texas in several campaigns against the Indians, including being utilized by General John H. Dyer’s and the militia brigade during the Rusk-Dyer Indian expedition. In October 1840 Colonel William G. Cooke’s troops took refuge at the fort while building the Military road, during which drought, loss of supplies, bitter cold, and scarcity of game, had nearly led them to starvation.

Once the Indian menace was removed in Northeast Texas in the early 1840s; however, Fort Inglish fell into disrepair and was eventually dismantled. The site was located on the grounds now occupied by a Veterans Administration center, north of East Ninth Street and east of Lynn Street, in downtown Bonham, Texas.