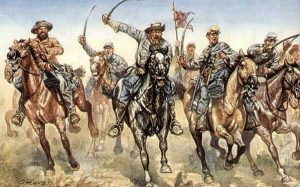 A small Confederate post during the Civil War, Fort Grigsby was located on the Neches River at the site of present-day Port Neches in Texas.

The post was built by Confederate Major Julius Kellersberg in October 1862. It was to be but one of a series of posts built as river defenses to block a possible Union advance up the Neches River after the fall of Fort Sabine. Though consisting only of mud embankments, reinforced by upright pointed logs, the post was defended by two 24-pound guns, overlooking a bend in the river. It was no longer necessary after the construction of Fort Manhassett and was abandoned sometime after July 1863.

The site is located eleven miles southeast of Beaumont in eastern Jefferson County.