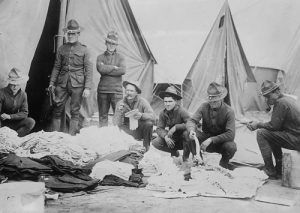 Fort Graham, Texas was established in March 1849 by Major Ripley A. Arnold and the 2nd U.S. Dragoons. It was named after either James D. Graham of the Corps of Topographical Engineers or Lieutenant Colonel William M. Graham who was killed in the Mexican-American War.

Located near the eastern bank of the Brazos River at Little Bear Creek 14 miles west of the present-day Hillsboro, the fort was one of eight established after the Mexican War to establish Federal authority in the new territory. The soldiers built a number of log and clapboard structures including a commissary, officers’ quarters, and a stable. Civilians were hired to build a hospital, a carpenter and wheelwright shop, a blacksmith shop, three corncribs, a wagon and mule yard, and a quartermaster’s storehouse.

The troops were tasked with escorting supply trains and travelers and to protect the civilians from hostile Indians. Because of its location on the upper frontier, close to the camps and villages of several Indian bands, it quickly became important as a frontier “listening post,” reporting on Indian activities and serving as headquarters for several Indian agents.

By 1851, more buildings were added to the fort including two sets of quarters, a log house for the commanding officer, a second stable, a guardhouse, a bakery, and a powder magazine. However, just two years later, as the frontier moved further west, the location ceased to be strategic. The post was closed in November 1853.

In 1936, the state bought the site and reconstructed the barracks. However, when Lake Whitney was built in the 1970s, the site was flooded. It was rebuilt once again on higher ground and now serves as a museum, located in Old Fort Park about seven miles northwest of Whitney, Texas.