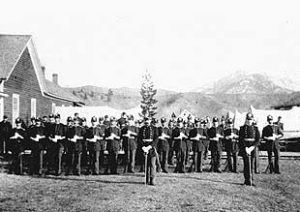 Fort Elizabeth Meagher, Montana, also known more simply as Fort Meagher, was built in response to the killing of John Bozeman in April 1867. It was established in May 1867 about eight miles east of the town of Bozeman by Brigadier General Thomas Thoroughman and Colonel Walter W. De Lacy of the Montana Territory Volunteer Militia. It was named for the wife of a former acting Governor of the Montana Territory, Thomas Francis Meagher, who drowned near Fort Benton, Montana.

The objective of the fort was to protect area settlers against hostile the Crow and Sioux tribes. The main post stockade and a picket-post erected on the approaches to Bridger Pass were designed to block the passes through the mountains into the valley.

The fort was abandoned just a few months later in August 1867 when nearby Fort Ellis was built.