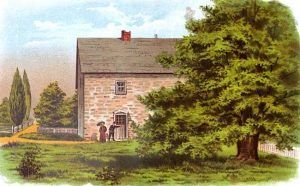 Fort Deshler in Lehigh County, Pennsylvania, was a French and Indian War fortification built by Adam Deshler, who was employed during the war to furnish provisions for provincial forces.

The fortified stone blockhouse, built in about 1760, was about 40 feet long and 30 feet wide, with walls that were  2 1/2 thick. It also served as Deshler’s home. Adjoining the building was a large wooden building, suitable as barracks for 20 soldiers and for storing military supplies. However, there is no evidence that the fort was ever garrisoned, serving instead as a refuge and rendezvous point for settlers of the region.

After the war, the building remained in the Deshler family until 1899, at which time, the building and its remaining 151 acres, were sold to the Coplay Cement Company. Never preserved, the building deteriorated until it finally collapsed in about 1940.

The fort was located near the present-day intersection of Pennsylvania Route 145 and Chestnut Street, between Egypt and Coplay, Pennsylvania. Today, all that is left is a historic marker. 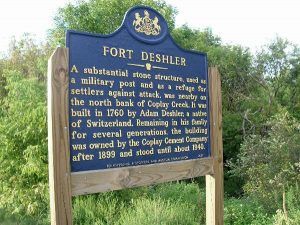