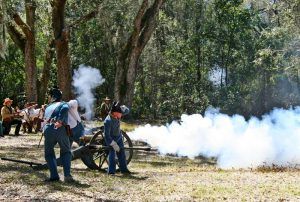 Fort Cooper was constructed in April 1836 during the Second Seminole War near present-day Inverness, Florida. General Winfield Scott instructed Major Mark Anthony Cooper and his 300 men of the First Georgia Battalion of Volunteers, to build a fort on the western shore of Lake Holathlikaha. The fort’s initial purpose was to house and protect and house the sick and wounded left behind by General Scott as he continued on his way to Fort Brooke.

While building the post, Major Cooper was ordered to hold his position and await relief troops in nine days. However, by the third day, the troops were discovered by the Seminole Indians who kept them under constant daily attacks. On one occasion the Seminoles tried to storm the fort with a force of more than 500 warriors. After 16 days, with provisions running out, a relief column returned to support the troops. Due to Major Cooper’s vigilant leadership during the two-week siege, the Georgia Battalion sustained about 20 men wounded and lost only one soldier — Private Zadock Cook of the Morgan Guards.

The square palisaded fort was completed, which included two redoubts and a two-story blockhouse with a 6-pounder cannon mounted in it. Afterward, the post was utilized as an observation and dispatch site, a horse depot, a scouting post, and a watering hole. When the war ended, the fort was abandoned. It was later used by the Confederate soldiers during the Civil War until it was captured by Union forces in February 1864.

In December of 1970, landowner John H. Eden Jr. sold the land to the State of Florida, who began working with archaeologists to excavate the Fort Cooper site. The site was added to the National Register of Historic Places in June 1972. Today, there are no remains of the fort, but the historic site is located within the 710-acre Fort Cooper State Park two miles south of Inverness, Florida, off of U.S. Highway 41 on South Old Floral City Road.