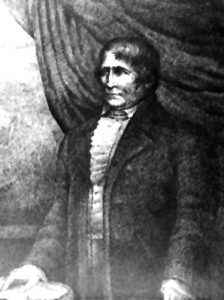 Fort Carondelet, Missouri was built about 1787 by French trader Pierre Chouteau, as a trading post on the high ground known as Halley’s Bluff, on the south bank of the Osage River, in Vernon County.

Later, the post became known as Fort Carondelet, named for Baron de Carondelet, the Spanish governor of Louisiana. Though no accurate description of the fort has been found, it was probably the customary log trading-building, a blockhouse, and a couple of cabins, surrounded by palisades, and garrisoned by a dozen or more of the employees of the fur trade company.

Years after it was abandoned by the fur traders, early settlers found the remains of a stone wall, which is believed to have been the ruins of the old fort. Today, there is nothing left of the old post and Halley’s Bluff is occupied by the Church of Christ at Zion’s Retreat, a small denomination within the Latter Day Saint movement.