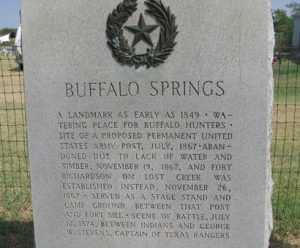 It was planned to be one in a line of sentry forts along the Red River and far frontiers of North Texas to protect area settlers from raiding Indians.

It was occupied by two companies of the Sixth Cavalry deployed from Jacksboro in 1867, with orders to erect substantial buildings. However, inadequate water and timber forced the troops to abandon the site. They soon returned to Jacksboro, where they established a new post called Fort Richardson later that year.

Afterward, the site was utilized as a stage stand and campground for travelers making their way between Fort Richardson and Fort Sill, Oklahoma.