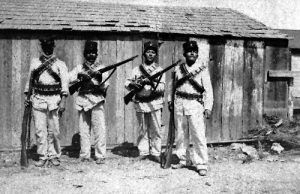 Fort Anahuac, Texas was located on a bluff called Perry’s Point that overlooked the entrance to the Trinity River. It was one of six new outposts built by the Mexicans designed to stop the flood of immigration from the United States to Texas. It was named Anáhuac, the ancient home of the Aztec. The Mexican soldiers lived temporarily in fortified wooden barracks about ½ north of the bluff in the center of present-day Anahuac. Beginning in March 1831, bricks for the building of the permanent fort were made by convict soldiers on-site. When the fort was complete its exterior walls enclosed two redoubts on the southwest and northeast corners of the bluff. Initially staffed with about 45 soldiers, it grew to almost 300 men by May 1832.

The fort became the site of the first armed confrontation between Anglo-Texans and Mexican troops on June 10-12, 1832 when Texans, led by Colonel Francis White Johnson attacked the fort. At the time, William B. Travis was being held in the old barracks located north of the fort that had been turned into a jail. Successful, the Texans dismantled the fort when they left in July 1832. A few months later, a fire burned much of the wood and area residents removed bricks and other materials to use for their own building purposes.

In January 1835, Captain Antonio Tenorio was sent with about 40 soldiers to reopen the fort. However, upon arrival, he found it in terrible disrepair. He soon requested wood to make improvements, but when it arrived in May, it was burned by Texans before it could be utilized. Led by William B. Travis, Texans attacked the site on June 29, 1835, but overmanned and under-gunned, Tenorio and his men had no choice but to flee.

Mexican soldiers never returned to the old post, which soon became private property. Chambers County acquired the property in 1946 and any remaining rubble was buried for safety reasons. The site is a Chambers County Park today, located on State Highway 563 one mile south of Anahuac.