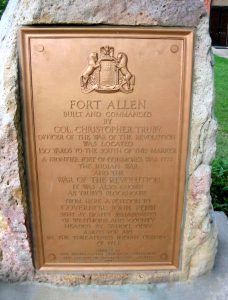 Fort Allen was a structure built for the local people living in Hempfield Township, in Westmoreland County, Pennsylvania. It was constructed in 1774 after about 800 pioneer settlers, fearful of Indian attacks, petitioned the colonial government for aid and protection. Also called Truby’s Blockhouse, the fort is believed to have been named for Andrew Allen of the state’s governing body at the time — the Supreme Executive Council. Commanded by Colonel Christopher Truby, the post protected the Harrold’s and Brush Creek settlements during Dunmore’s War in 1774 and later, in the American Revolution; however, it was never involved in an emergency. It was abandoned as a fortification when Indian hostilities ceased.

There is nothing left of the fort today but a stone monument. It is located on the grounds of St. John’s Harrold United Church of Christ at the corner of St. John’s Church Road and Baltzer Meyer Pike, which is about 150 yards north of where the fort was located. There is also a roadside marker at the intersection of Route 136 and Baltzer Meyer Pike in the town of Fort Allen.