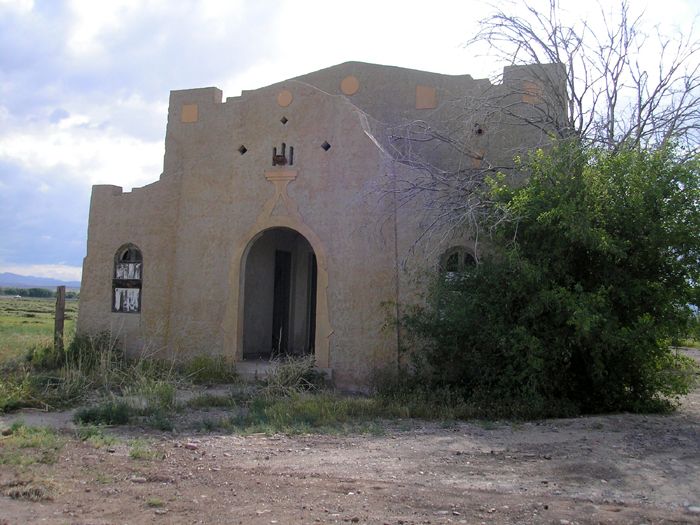 An old church in Eden, Arizona by Kathy Weiser-Alexander.

Eden, Arizona, located in Graham County was an agricultural community established by Mormon settlers in 1881. It was named after the Garden of Eden in the Hebrew Bible, as well a town of the same name in Utah. 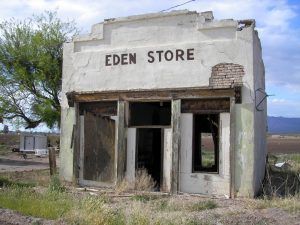 The settlement was first established in the Gila Valley when Moses Curtis and William Hawkins came from Brigham City to the site on the Little Colorado River. They bought claims to two-quarter sections for $250. Curtis farmed the area just across the river north from Smithville while his sons and Hawkins worked at building a canal from the river to cover their claims. In 1882 the canal provided enough water for a small crop to be raised. A large stockade of cottonwood poles covering several acres was built as protection against the Indians. By fall, eight families were living there. The community first took the name of Curtis, but, when a post office was established in 1882, it was renamed Eden. By 1884 Eden had a population of 114, and by 1886, had grown to 170.

The Mormon settlements throughout the Gila Valley, including  Eden, Central, and Thatcher, were soon favorably known to the church and the Mormon population grew from 416 In 1882, to 836 by the end of 1883. By 1886, the valley was populated by 1,647 people and continued to grow. In the meantime, the Mormons were building canals throughout the Gila Valley to increase agricultural production. Before they were finished, they had built 60 miles of canals and brought about 35,000 acres under cultivation 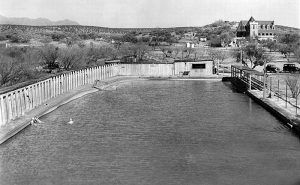 Indian Hot Springs was located about 2.7 miles north of Eden.

In 1903, Indian Hot Springs, located about 2.7 miles north of Eden, were developed. These natural springs had long been known to the Native Americans in the area for their healing properties. In the late 1870s and early 1880s, the springs had become a commercial property and the streams were diverted into pools. The soldiers of Fort Thomas often frequented the springs and relaxed in tents set up around the ponds. However, it was not until the construction of the Gila Valley, Globe, and Northern Railway in 1895, that the venture became prosperous when visitors were transported from the train station in Pima by stage to Indian Hot Springs. 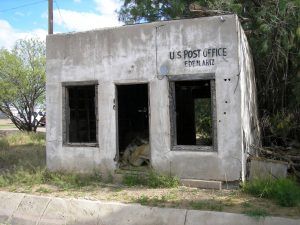 Called the “Jewel in the Desert,” commercial development of the site in 1903 consisted of a beautiful three-story Victorian hotel, which replaced the previous tent cottages. In 1905, the largest swimming pool in Arizona was built, measuring 255 feet by 70 feet. It was enlarged and cemented in 1916, at which time 1.5 million gallons of water flowed into the pools, tubs and mud baths.

In 1966 the health department closed the pool because the water was determined to be unsafe. Afterward, the Indian Hot Springs property changed hands many times and was once owned by a group including Mick Jagger of the “Rolling Stones.” It was a nudist colony populated by “hippies” in the 1970s and 1980. Later, it became a retreat for an environmental group called “Earth First” and a group called “Ruckus.” In 2008, the three-story hotel burned down.

Today, the town of Eden is still sparsely occupied but is mostly filled with abandoned buildings including deteriorating storefronts, a church, houses, and the old post office. 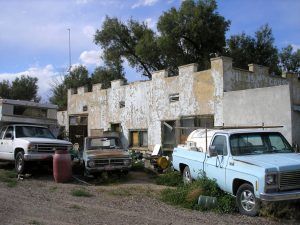 An old garage in Eden, Arizona by Kathy Weiser-Alexander.