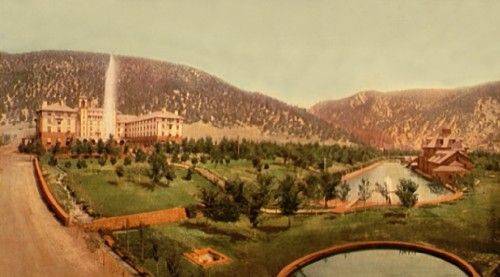 Built in 1891, the Hotel Colorado opened its doors to the public in 1893 with 191 sleeping rooms that rented for as much as $3 a night for the most luxurious accommodations. The tower topped sandstone building was modeled after the 16th century Villa de Medici in Italy, was the area’s first electrically lit hotel and boasted a courtyard fountain spraying skyward some 180 feet, as well as a spa and swimming pool to lure the rich into partaking of the medicinal hot springs.

During its early heydays, the hotel hosted such illustrious guests as Presidents Theodore Roosevelt and William Taft, as well as the “unsinkable” Molly Brown. In the 1920s, the hotel became the playground for a number of Chicago gangsters, including Diamond Jack Alterie, the Verain Brothers, and most notably, Al Capone. During World War II, the hotel was utilized as a naval hospital.

Today, 131 of the original rooms are available to guests, with the rates varying from $110 per night to $675 for deluxe suites. However, hotel guests and staff are not the only occupants of the historic site, as the Hotel Colorado is home to several spirits that inhabit the building.

CCPI Paranormal Investigations, based in Grand Junction, Colorado, had the opportunity to visit the hotel and explore its rich history, as well as interact with a few of the “permanent” guests in September 2006.

Guests and staff have reported high activity between the hours of 2-4 a.m., describing the elevator moving from floor to floor with no passengers, the smell of cigar smoke — presumably from Walter Devereaux — in the main lobby, the smell of perfume and the sounds dishes being moved in the Devereaux Dining Room, a young girl in Victorian clothing seen playing with a ball in various areas of the hotel, and a female apparition that peers over sleeping male guests.

Another report tells that during the time the hotel served as a Naval Hospital, a chambermaid was caught in a lover’s triangle and murdered by one of her jealous lovers. Her screams can still be heard in areas of the hotel and the room in which she died has had so much activity, it cannot be rented and serves as a storage room.

Although most of the activity takes place between 2-4 am, CCPI had their greatest success between midnight and 1 a.m., describing it as follows:

We were fortunate enough to be able to access most areas of the hotel from the basement to one of the bell towers and collected some interesting information. We experienced the most activity on the third and fifth floors, using Cell Sensor EMF meters, IR (Infra-Red) Thermal Scanners, digital cameras, and night vision camcorders. 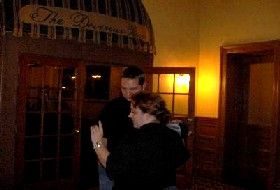 Since several guests have reported seeing a small girl in the hotel, we decided we would attempt to interact with her. Using a ball, we set up a monitoring system with IR cameras and an IR motion sensor. We placed the ball on the floor of room 416 with the motion sensor and cameras focused on it. The ball did not move during the course of our investigation, although we did have several instances where our electronic door key would not work and the lights frequently turned themselves off while we were in the room.

The basement of the hotel currently serves as storage for the hotel, as well as a spa, chiropractor’s office, outdoor excursion office, and other retail businesses. During business hours, it can be accessed from the outside. It also contains the original hydraulic lift designed to bring supplies from the ground level to the basement.

It is speculated that while staying here, Al Capone used the lift as an escape route on more than one occasion when the hotel was raided in search of him. The lift is still operational today. Another area of the basement served as the morgue while the hotel was being used as a Naval Hospital. Several hotel staff members have reported locked doors opening and lights turning themselves on and off in this area. No one can pinpoint which spirit occupies the basement area, although it is speculated that it was one of Walter Devereaux’s many hangouts. During that part of our investigation, we did not detect any presences, although the area of the former morgue was rather creepy. 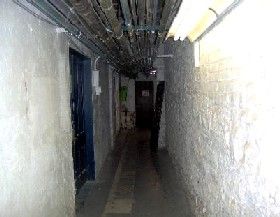 Corridor to the area of the former morgue, when the hotel was used as a Naval Hospital during WWII

On the third floor, we experienced a higher amount of activity. Several guests and staff have reported apparitions, strange smells, sounds, lights turning on and off, televisions changing channels, and knocks on doors with no one there. Our investigation took us to the center of the corridor in front of room 325.

There, we recorded high electromagnetic fluctuations – the needle was pegged at 10 miligauss on the Cell Sensor – with an immense cold and heavy feeling in that area. We were not able to locate any possible draft source in that area, nor could we find any source for the spike in electromagnetic energy. Our baseline readings for that area were 1-3 mG.

The second area of heightened electro-magnetic energy was on the fifth floor across from room 551. There, we discovered a locked, unmarked door with electro-magnetic fluctuations ranging from 8-10 miligauss. Our baseline readings for that area were 3-5 mG.

Although there were no temperature fluctuations at this location, a photograph of the area indicates what could be spirit energy. (see right) We later learned that the unmarked door in front of room 551 is a door to the attic. Other guests and psychics have reported a male spirit that inhabits that area, possibly one of the workers who helped construct the building in 1893. Room 551, itself has also had many reports of strange phenomena. 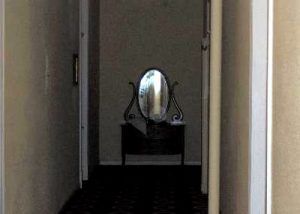 A rather large “orb” can be seen in front of the mirror. The doorway to the left is the entrance to the attic. To the right is room 551

In 1982, the hotel was being renovated and new wallpaper was being applied to the walls of room 551. The next morning, all of the wallpaper that had been applied was rolled neatly on the floor. The wallpaper was replaced but again found on the floor in the morning. After two or three attempts, several wallpaper samples were placed on the bed in 551. The next morning, all but one of the samples was on the floor. The sample that was left on the bed was applied to the walls and remains there today. Unfortunately, the room was occupied so we were not able to investigate inside.

The hotel has two bell towers turned into luxury guest suites. Room 661 has been dedicated to one of the most famous women in Colorado, Molly Brown. Spirit activity has been reported in this room as well as the other bell tower suite, room 662. While both suites have reports of spirit activity, the Molly Brown Suite is reported as being the most active. Unfortunately, that suite was occupied at the time of our investigation, but we were able to check out room 662. While we did not detect any paranormal activity in that room, we were awe-struck at the beauty of the room itself and can see why the spirits would choose to stay there.

As we concluded our investigation, we returned to our room for rest and data analysis. During this time, we experienced an interesting phenomenon in our own room. While going over the data we collected, the light in the room would turn itself off. Clarissa would get out of her seat to turn it back on. Halfway across the room to the light switch, it would turn itself back on. After playing this game a few times, Clarissa asked the spirit to please refrain from turning off the light for a while so we could get some work done. The spirit complied until we turned in to get some sleep. As we settled under the covers and started drifting off to dreamland, the lights turned on. A sleepy Clarissa responded “very funny” and the light went out. This phenomenon reminded us that, while we are gaining knowledge about ghosts and the spirit world, they still know more than we do and have the upper hand.

Today, the Hotel Colorado, listed on the National Register of Historic Places, has been fully restored and offers a restaurant, lounge, coffee and gift shop, spa, fitness center and meeting rooms. Though the bathhouse is now operated separately, the Hot Springs have expanded to include two outdoor, spring-fed pools, a small therapy pool, and a fitness center. 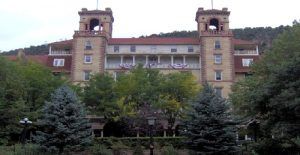