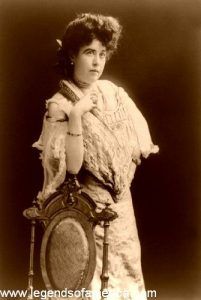 Margaret “Molly” Tobin Brown, better known as “The Unsinkable Molly Brown,” was one of the few that survived the sinking of the Titanic.

Margaret Tobin originally came from humble beginnings. Born in Hannibal, Missouri on July 18, 1867, she was one of six children of Irish immigrants. In 1883, Molly’s older sister Mary, and her husband Jack Landrigan, moved to Leadville, Colorado to work in the mines. Three years later, Molly and her brother Daniel followed them to the rough and tumble mining town. While Daniel went to work as a miner, Molly took a job in a department store. Soon, Molly met James Joseph (J.J.) Brown, an enterprising and self-educated miner. In 1886, they married. While in Leadville,  Molly became involved in women’s rights, helping to establish the Colorado chapter of the National American Women’s Suffrage Association. She also established a soup kitchen to assist miners’ families.

In the meantime, her husband, J.J. was moving up at his job at the Little Johnny Mine, becoming a superintendent. However, when he invented a method that could reach gold at the very bottom of the mine, proving instrumental to the Little Johnny’s owners, the Ibex Mining Company, he was awarded 12,500 shares of stock and a seat on the board. The Browns became instantly wealthy and in 1894, moved to Denver, Colorado where they became active in social, philanthropic, and political circles. The Browns had two children.

Though J.J. and Molly were privately separated in 1909, they remained close until his death in 1922. In 1912, Molly was on a European tour with her daughter when she learned that her oldest grandson was ill. She immediately booked first-class passage back to the U.S. on the first ship that was available, the Titanic.

At about 11:40 p.m. on April 14, 1912, the Titanic collided with an iceberg and began to sink. Brown helped others board the lifeboats before being forced into one herself. She then took an oar herself in her lifeboat and urged that the lifeboat go back and save more people. However, her urgings were met with opposition from Quartermaster Robert Hichens, the crewman in charge of the boat who was fearful that if they went back, the lifeboat would either be pulled down due to suction or the people in the water would swamp the boat in an effort to get in. After several attempts to urge Hichens to turn back, Brown even threatened to throw the crewman overboard. Brown’s efforts sealed her place in history. The Titanic sank early on April 15, 1912, at around 2:20 a.m. 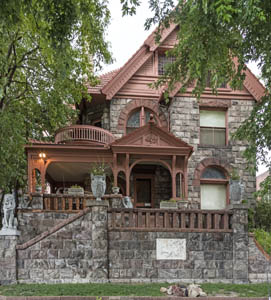 Upon being rescued by the ship RMS Carpathia, Brown proceeded to organize a survivors’ committee with other first-class survivors. The committee worked to secure basic necessities for the second and third-class survivors and even provided informal counseling.

The French Legion of Honour recognized Molly in 1932 by awarding her for her efforts during the sinking and her work with miners and women and children. Margaret Tobin Brown died of a brain tumor on October 26, 1932, in New York City. She is buried at the Holly Rood Cemetery in Westbury, New York.

In 1985, she was inducted into the Colorado Women’s Hall of Fame.