The Chawasha people are an Indian tribe of Louisiana, who formerly lived on the Bayou La Fourche and eastward to the Gulf of Mexico and across the Mississippi River. Today, they are part of the federally recognized tribe of the Chitimacha.

Along with the Washa and Yagenachito tribes, the confederation once occupied about 15 villages. The name Chawasha is a Choctaw term meaning “Raccoon Place.” When Spanish Explorers first came to America, the combined strength of the four groups was estimated to be about 20,000. However, as more and more European settlers came to the area, the tribes suffered greatly from infectious diseases, which reduced their number by half

In 1730, to allay the panic in New Orleans following the Natchez Uprising of 1729 which resulted in the massacre of white settlers, Governor Etienne Boucher de Perrier allowed a band of black slaves to attack the Chawasha, after which, it was widely reported that they were then destroyed. This, however, was grossly exaggerated. By 1739, they lived with the Washa tribe on the west side of the Mississippi River above New Orleans.

By 1784 the combined numbers of the Chitimacha tribes had fallen to just 180, and in the early part of the 19th century, they were absorbed by the Houma. In the early 20th century, however, the Chitimacha began to re-establish their tribal identity. From just six families in 1880, the numbers have grown to reach a present figure of about 1,250. 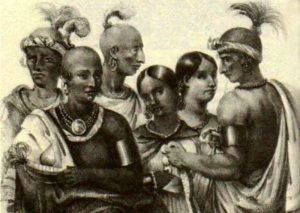 In 1917, the Chitimacha Tribe was officially recognized by the United States government. For more information see the Chitmacha Nation.