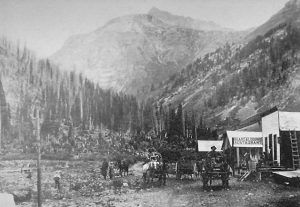 The ghost town of Chattanooga, Colorado, was located in the Red Mountain Mining District about seven miles northwest of Silverton and three miles south of Red Mountain Pass.

In 1882 a settlement known as Sweetville began below Red Mountain Pass at the head of Mineral Creek near its conjunction with Mill Creek. E.T. Sweet’s saloon was the first business in the camp, and before long, there was also a restaurant, a butcher shop, and a lumberyard. Soon, a rival camp named Chattanooga was established just next door. In 1883, the two camps merged under Chattanooga’s name, and a post office was established in April. Frank Carol, the first postmaster, named it for his hometown in Tennessee.

Additional businesses were soon established, including the Enterprise Restaurant, two mercantiles, and a hardware store. By the end of 1883, over 75 buildings had been constructed.

Also, in 1883, the San Juan County commission awarded George W. Seaman a contract to grade a wagon road from Chattanooga south to Silverton. The purpose was to increase the county’s relationship with the district and secure a role as a gateway community over rival Ouray. Simultaneously, the Red Mountain Sampling & Concentrating Company was organized and built a mill to process the district’s low-grade ore. 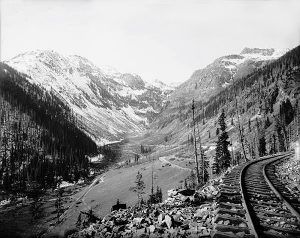 Silverton Railroad Horseshoe Curve above Chattanooga, Colorado. Otto Mears’ Toll Road is in the valley nearby.

Established at a lower elevation than other towns in the mining district, Chattanooga served as a supply center for the area. In the winter, goods, supplies, and ore were often packed on sleds. As Chattanooga grew, it was the center of a small collection of mines and the gateway to the north’s major mines.

However, soon, mining activity in the immediate area began to decline, and Chattanooga’s role as a supply center diminished with the arrival of the railroad. Its population shrank, and the town depended on Red Mountain district traffic more than ever.

Chattanooga weathered the late 1880s recession, and its tiny business district included a mercantile and a combination saloon, restaurant, and boardinghouse run by James Sheridan. 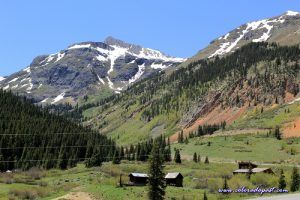 When the value of silver increased in 1890, Chattanooga residents grew optimistic that several important mining ventures would revive the town. To the south lay the Bonner Mine, and to the north was the Silver Ledge Mine.

About the time of the silver panic that closed down hundreds of silver mines in Colorado, gold was discovered in the area, and hundreds of miners descended upon Chattanooga, staking numerous claims. But for Chattanooga, it wouldn’t be enough. In 1892, a fire swept through the city, destroying most of the buildings that were never rebuilt. Its post office closed in 1894.

However, the small collection of buildings continued to serve as a stop on the Silverton Railroad, and a few prospectors and miners occupied cabins at times. In 1900, the town still had a population of 55 people.

In 1904, the Silver Ledge Mine owners built a mill at the site of Chattanooga, restoring activity in the area. A post office named Silver Ledge opened the same year. The Silver Ledge Mine produced some free gold at this time, but it mainly yielded low-grade galena, a lead ore that frequently contains silver, zinc, cadmium, and arsenic. The mine was the first in the country to recover marketable amounts of zinc and drew attention to the small town. At that time, it was one of only two mines still operating in the Red Mountain Mining District. But, just two short years later, the mine and the post office closed. In 1910, the U.S. Census reported no one living in the community.

The Silver Ledge Mine, above Chattanooga, was idle and dilapidated by 1920.

Today, only a few scattered buildings remain at the site. 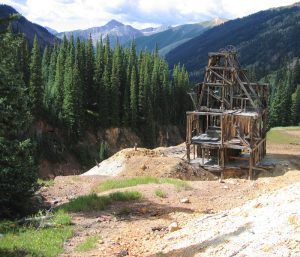 Silver Ledge Mine, Chattanooga Valley, by the U.S. Geological Society