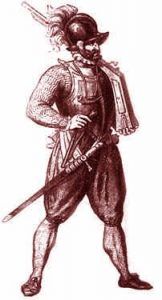 Long before the white man ever came to the United States the legend of La Caverna del Oro, the Cave of Gold, was passed down from generation to generation by the  Indians. When the Spanish explorers arrived in the 15th century, monks translated the legend and the gold was eagerly sought by the explorers.

Caverna del Oro, 13,000 feet high upon Marble Mountain in Colorado, was believed, by the Indians, to be plagued by demons. However, in 1541, three Spanish monks from the Coronado expedition forced the Indians into slave labor to extract gold from the cave. Finally, the Indians staged an uprising against the monks and two of them were killed. However, the third monk, De la Cruz, convinced the Indians that he was able to subdue the “evil spirits” lurking underground in the mine. With the help of the slave-miner natives, vast amounts of gold were brought forth from the subterranean passages. Later, when the Indians had served their purpose, De la Cruz and his small group of surviving Spaniards killed the Indians, loaded up their treasure on pack mules, and fled south back to Mexico.

The cave was then left unexplored until about 100 years ago when it was found again by Elisha Horn. Climbing on Marble Mountain, only a few miles from the town of Westcliff, Horn stumbled upon a skeleton clad in Spanish armor, with an arrow sticking out of its back. Painted on the rocks above the skeleton was a very old red cross, which can still be faintly seen to this day. Near the cross was the entrance to Caverna del Oro.

In the 1920s, the cave was explored again by a Colorado Mountain Club led by a U.S. Forest Ranger. The Ranger had been told by a 105-year-old Mexican woman that there was gold buried deep within the cave. The woman said that when she was a child, she could remember journeying to the cave where miners would come out with loads of gold.

She claimed that within 500-700 feet of the cave entrance there was an oaken door, which was the entrance to the rich Three Steps Mine. She explained that the treasure lay behind this set of padlocked wooden doors. The Ranger and the club members explored the many rooms and passages in the cave, climbing down as far as 500 feet, but did not discover the wooden doors, nor any gold.

However, they did find many other interesting items, including a 200-year-old ladder and a hammer which was made sometime in the 1600s. Lower down on the mountain, hidden amongst the aspen trees the club members found the ruins of an old fort as well as many arrowheads, which were scattered about the hillsides. 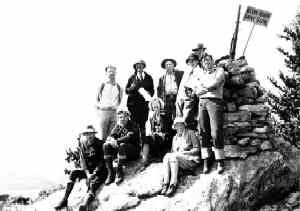 Many people have since explored the cave and have uncovered other old items including a windlass (rope and bucket), a clay jug, and a shovel left by earlier explorers or miners. In addition, one group found a human skeleton chained by the neck to a wall deep down in the cave.

Nevertheless, no gold has ever been found (or at least, none that anyone is talking about.) Some people think that the entrance by the cross might have been an escape route, rather than the true way in, and the “real” entry to the cave lies hidden lower down on the mountainside. Regarding the mystery of the wooden door, behind which lies the treasure, some theorize that the door has since been hidden by a rockslide.

La Caverna del Oro sits at 13,000 feet on Marble Mountain, just over Music Pass to the northeast of the Great Sand Dunes.