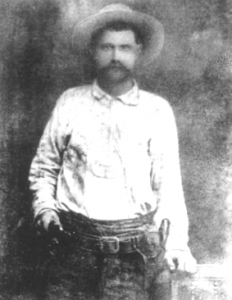 Brack Cornett was the outlaw co-leader of the Bill Whitley Gang, robbing banks and trains in southwest Texas in the late 1880s.

Cornett was born in Goliad County, Texas, to Laban and Cordelia McGinty Cornett on May 22, 1841. Nothing is known of his early life.

In February 1887, he joined up with Bill Whitley, and the two formed a gang that was successful in their robbery endeavors for a couple of years. However, their first foray into robbery in early May 1887 was a bust. On May 18, they robbed a Missouri-Pacific train while it was stopped at McNeill Junction, 13 miles outside of San Antonio, getting away with about $4,000.  In June 1887, the gang robbed an east-bound train near Flatonia, Texas, making off with over $7,000.

The gang robbed a bank at Cisco, Texas, in February 1888, making off with some $25,000. Several days later, they robbed the International-Great Northern Railroad, escaping with $20,000. On June 18, 1888, Cornett, using the alias “Captain Dick,” led the band that robbed the Southern Pacific near Schulenburg, Texas. This robbery was described by the New York Times as “the most daring train robbery that ever occurred in Texas.”

However, when they planned to rob the Southern Pacific train out of Harwood, Texas, on September 22, 1888, they found a posse waiting for them. Somehow, U.S. Marshal John Rankin received advance notice of the robbers’ plans, and he, along with Deputy Duval West and several Texas Rangers, were on board the train. The gang stopped the train just three miles outside of town and attempted to rob it but were driven off by the lawmen. Gang members fled, and just a day or two later, the gang robbed a train near Flatonia, Texas.

The gang was finally trapped by U.S. Deputy Marshals a few days later, on September 25, 1888, in Floresville, Texas. Bill Whitley was killed in the inevitable gunfight, and another gang member was taken prisoner. Bill Whitley was just 24 years old. Brack Cornett was able to escape and fled to Arizona. 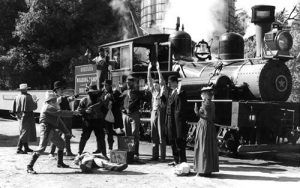 However, one Texas Ranger, Alfred Allee, doggedly pursued Cornett to Frio, Arizona, where he caught up with him. Gunplay erupted once again, and when the smoke cleared, Cornett was dead. Allee collected various express company rewards of $3,800 for bringing down Cornett.