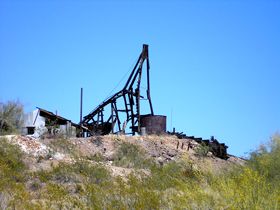 Vulture Mine, Arizona by Kathy Alexander.

In 1887, Superintendent Josiah Gribble of the Vulture mines and two guards, Johnson and Littlefield, were murdered a few miles from Vulture, Arizona, as they were starting for Phoenix with a bar of gold bullion, valued at $7000, the product of the Vulture Mill.  Gribble had been warned at Vulture by T.E. Farish of the risk he was taking but replied that he had fought robbers in Australia and South Africa and was willing to meet any thieves in Arizona.

The murderers, Inocente and Francisco Valenzuela and a younger Mexican, probably saw the arrangement of guards from afar and killed the three at the first fire. The murderers fled southward, headed for Mexico. At the Gila River, they separated.

They tried to cut the bar with an ax but failed, so they buried the bullion in a cache near Powers’ camp. The chase after the murderers was one of the most spectacular ever known in the Southwest. Sheriff Bud Gray, Hi McDonald, Henry Garfias, and Jim Murphy were all hardy and determined men and hard riders.

They followed the trail across the blazing desert, and the Mexicans narrowly escaped capture. Francisco got safely into Mexico, escaped extradition, and with time, died at Altar. Inocente, from Phoenix, later stole back to the cache on the Gila. His absence was marked, and a posse descended upon him. Impeded by his golden burden, he could not travel at any speed. He showed fight, was killed, and the bar was recovered. The third Mexican claimed that he was compelled to participate in the robbery, and his story was accepted because he turned state’s evidence.

For years, the same Valenzuela Gang terrorized the section along the Hassayampa River, robbing placer miners and killing wherever they were opposed. They were also charged with the murder of Barney Martin and his family in 1886.

Martin had kept a little store and had acted as stage agent at Stanton in the Antelope Hill section of Southern Yavapai County, where he had incurred the enmity of the local gang of cutthroats and thieves. Martin finally sold out, and with the money for the sale of his property in his pocket and with his wife and several children, he loaded his few remaining effects into a covered wagon and started for Phoenix. Few men were more popular than he and his departure was generally regretted, so his way southward was one of welcome and good cheer.

Captain M.H. Calderwood at Coldwater Station on the Agua Fria River had been notified of the impending arrival of the Martin family and prepared a royal reception. But several days passed after the stage had reported Martin’s departure from the Brill Ranch on the Hassayampa River, and Calderwood became alarmed. Not far from the present Hot Springs Junction was found the track of a wagon leading off into the hills. This track was followed a few miles and the trailers came upon the remains of a wagon that had been burned and in the ashes, the charred bodies of Barney Martin and his family members. The murders had been committed on the highway, and the wagon had been driven away from the road to try to hide the evidence of the crime. The bodies of the murdered ones were brought back to the Brill Ranch, and there interred, the headstone a perpetual reminder to those who after that passed of the dangers of pioneer days.

There was an understanding at the time that these Mexican outlaws had a secret leader in S.P. Stanton. A young Mexican assassinated him about 1886 in revenge for an insult of several years before to the boy’s sister.  Stanton Long was a resident among the Mexican population, ostensibly a storekeeper, supplying goods to the Mexican vendors.

He was charged with complicity in the Barney Martin murder, but nothing could be shown against him.  There was a general belief that Stanton had been a Catholic priest, but this was denied in 1901 by Hector Riggs, who said, “Stanton was never a  Catholic priest, though he went far upon the road toward priesthood.  He was expelled from Maynooth College for immoral conduct, and though he took his case in person to Pope Pius IX, he failed to get himself reinstated.”

By James Harvey McClintock in 1913, compiled and edited by Kathy Alexander/Legends of America, updated December 2021. 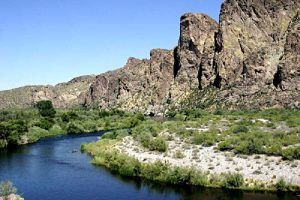 About the Author:  James Harvey McClintock was born in Sacramento in 1864 and moved to Arizona at the age of 15, working for his brother at the Salt River Herald (later known as the Arizona Republic). When McClintock was 22 he began to attend the Territorial Normal School in Tempe, where he earned a teaching certificate. Later, he would serve as  Theodore Roosevelt’s right-hand man in the Rough Riders during the Spanish-American War and become an Arizona State Representative. Between the years of 1913 and 1916, McClintock’s published a three-volume history of Arizona called Arizona: The Youngest State (now in the public domain,) in which this article appeared. McClintock continued to live in Arizona until his poor health forced him to return to California, where he died on May 10, 1934, at the age of 70. Note: The article is not verbatim as spelling errors and minor grammatical changes have been made.