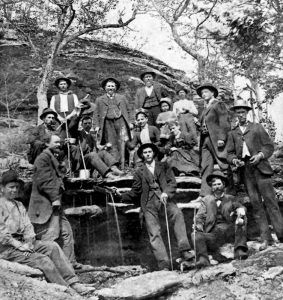 Partaking of the healing waters at Eureka Springs, 1881.

Eureka Springs Arkansas, nestled in the heart of the Ozark Mountains of Northwest Arkansas, is steeped in history, so much so, that the entire city is listed on the National Register of Historic Places. Amongst the mountainous terrain and winding streets are numerous Victorian-style buildings, cottages, and manors.

Centuries before the beautiful Victorian city of Eureka Springs was born, the area had long been known by the Indians for its healing waters. An old Native American Legend tells of a Sioux Princess who suffered from an eye affliction that had taken away her sight. However, when she washed her eyes in the Basin Spring, her eyesight was fully restored.

Before long, the legend spread and Indians came from far and wide to partake of the healing waters. It soon became a sacred site, where war could not be made among the tribes and only peaceful gatherings were allowed. This was respected among all the Indian bands. 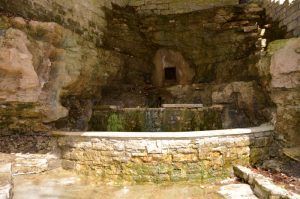 The first white settler to come upon the healing springs was a man named Dr. Alvah Jackson. Having heard the Indian legend, he brought his son to the springs in 1856 to also cure an eye ailment. When the Civil War broke out, Jackson established what became known as “Dr. Jackson’s Cave Hospital” to care for the ill and injured. After the war, he established a successful business selling “Dr. Jackson’s Eye Water.”

The “secrets” of the springs remained known to only the locals until early 1879 when Dr. Jackson’s friend and hunting companion, Judge J. B. Saunders of Berryville, visited him. Suffering from a skin disease called erysipelas that causes severe inflammation, the judge was allegedly cured after visiting Basin Spring. Using his influence, the judge began to promote the springs throughout the state of Arkansas.

Word quickly spread that the spring’s miraculous, healing waters were said to cure, or at least help, virtually every ailment known at the time, including diabetes, rheumatism, women’s diseases, asthma, paralysis, and more.

Almost overnight, thousands of visitors began to flock the area and the City of Eureka Springs was officially founded on July 4, 1879. The first cabin was built by Judge Saunders, who utilized it as a summer retreat. Next came a rough board shanty built by O.D. Thornton, who utilized it not only as a place of residence but also as a general store. By the end of July, there were twelve structures around the springs along with numerous tents and wagons. By mid-August, the population had grown to about 300 and before long another general store, a meat market, and a blacksmith shop were built. By the end of the year, the settlement’s population had reached some 10,000 people and supported numerous businesses including hotels, saloons, bathhouses, livery stables, groceries, and dry goods stores. 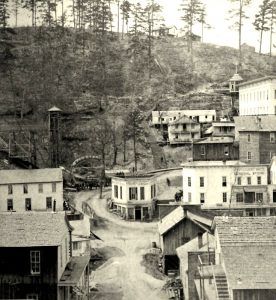 By 1881, the town was declared a “City of the First Class,” and had become the fourth largest city in Arkansas. Unlike the development of most cities, where the most desirable locations are on the higher elevations, the choicest lots in the settlement were near the springs. This is where the wealthy population of the burgeoning city built their homes.

The attraction of the springs also brought numerous investors and the Eureka Springs Improvement Company was soon organized by former Arkansas governor Powell Clayton. These enterprising investors began an era of “gracious living” in Eureka Springs that would last until the turn of the century.

One of the first tasks of the Improvement Company was to bring the railroad to the new city. At the time, the closest terminal was located in Pierce City, Missouri, some 55 miles to the northeast. At that time, the many visitors to the city were required to take a nine-hour stage ride from Pierce City in order to reach the springs. Effective in their efforts, the railroad was extended to Seligman, Missouri, just 18 miles away, in 1882. The Eureka Springs Railway was chartered in the same year and was opened to travel on February 1, 1883. The steam engine brought with it, not only numerous visitors searching for a cure but also a number of booming commercial enterprises. 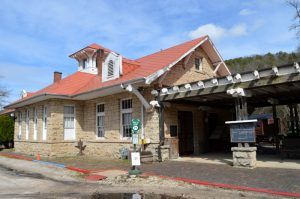 In no time, Eureka Springs became an important commercial center for the area. However, when the town suffered an extremely destructive fire on November 3, 1883, it destroyed approximately five acres of the town, including most of the businesses district. As a result, the Eureka Springs Improvement Company, as well as many of the city’s residents began to replace the older frame structures with new brick and stone buildings. The Improvement Company also began to make city improvements which included widening of the streets, installation of street lights, and the establishment of water and sewage systems.

In 1884, the Improvement Company, in partnership with the Frisco Railroad, began to build the famous Crescent Hotel. Considered America’s most luxurious resort hotel of the time, the majestic inn opened among a midst of fan fair on May 20, 1886. Notables from across the country attended its grand opening, which included a gala ball, complete with a full orchestra, and banquet dinner for 400 celebrants.

4 thoughts on “Eureka Springs, Arkansas – Little Switzerland of the Ozarks”