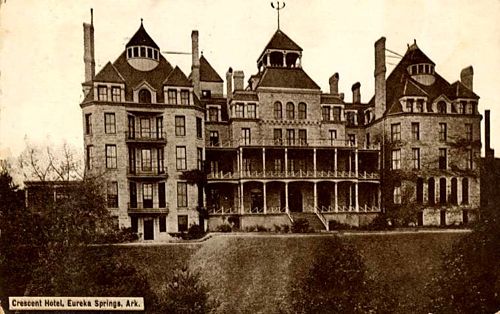 Perched on the crest of West Mountain above the Victorian village of Eureka Springs, Arkansas is the historic 1886 Crescent Hotel & Spa. The 78-room resort hotel is not only known as one of America’s most distinctive and historic destinations, but it is also renowned for a bevy of spirits that are said to continue to walk upon these palatial grounds.

Built by the Eureka Springs Improvement Company and the Frisco Railroad, the hotel was designed by Isaac L. Taylor, a well-known Missouri architect who had designed a number of famous buildings in St. Louis. Twenty-seven acres at the north end of West Mountain was chosen for its majestic location overlooking the valley.

It was an important time in Eureka Springs’ history as the “healing waters” of the Ozarks had become well known across the nation. People from near and far were swarming to the area in hopes of curing their ailments and easing their pains. The developers of the Crescent Hotel & Spa planned to take advantage of these many travelers by building the most luxurious resort in the country.

Powell Clayton, a former governor of Arkansas from 1868 to 1870, formed the Eureka Springs Improvement Company in hopes of taking advantage of this prosperous period. Along with a number of other investors, the Frisco Railroad joined in on the plan, knowing that the resort could only spur their business.

Numerous stonemasons were brought in from Ireland to begin the construction in 1884. Due to the density of the magnesium limestone used to build the hotel, special wagons were constructed to move the massive pieces of stone from the quarry site on the White River. Designed in an eclectic array of architectural styles, the masons built 18-inch walls, a number of towers, overhanging balconies, and a massive stone fireplace in the lobby.

As construction continued for the next two years, more and more workmen were hired as electrical lights, modern plumbing, steam heating, an elevator, extensive landscaping, and luxurious decorations and amenities were built into the hotel. In the end, the hotel cost $294,000 to build, an extremely extravagant amount for the time.

On May 20, 1886, the grandiose Crescent Hotel opened among a midst of fan fair. The local Eureka Springs Times Echo called it “America’s most luxurious resort hotel.” Notables from across the country attended its grand opening, which included a gala ball, complete with a full orchestra and banquet dinner for 400 celebrants.

Offering large airy rooms with exquisite furnishings, a dining room that once seated more than 500 people, and outside amenities that included a swimming pool, tennis courts and croquet, among a beautiful landscape of flower gardens, winding boardwalks and gazebos, the opulence of the hotel was unmatched at the time.

Immediately, the well-to-do of the nation began to flock to the luxurious resort hotel as liveried footmen met them at the Frisco depot before transporting them to the inn. Once there, the guest could not only enjoy the healing waters of the spa, but also a stable of 100 sleek-coated horses, tea dances in the afternoon, and elaborate parties every evening with a full in-house orchestra.

However, the prosperity was not to last. After the turn of the century, people began to realize that the acclaimed “healing waters” didn’t have the curative powers that the hotel and the city were so known for. Little by little, people stopped coming to the beautiful resort.

From 1908 to 1924, the building was utilized as the Crescent College and Conservatory for Young Women but continued to act as a resort during the summers. However, after operating for 16 years, the revenues from tuition and summer guests was not high enough to maintain the costs of running the large building and the Women’s College closed. After sitting abandoned for the next six years it briefly reopened as a junior college from 1930 to 1934. 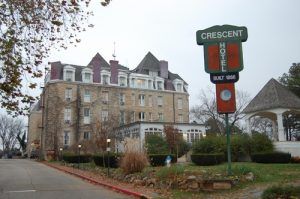 In 1937 a man named Norman Baker arrived on the scene and bought the aging hotel for the purpose of opening a cancer hospital and health resort. Advertising miracle cures that required neither surgery nor painful extensive tests, the Baker Hospital, alleged that its patients would walk away from the “resort” cancer-free.

However, what was unknown to the many desperate patients who flocked to the hospital was that Norman Baker’s “miracle” was nothing more than a scam that he had been purporting on unsuspecting patients for years. The man had absolutely no medical training and had been convicted in Iowa in 1936 for practicing medicine without a license. Furthermore, the American Medical Association had condemned the many elixirs that were sold for a number of different ailments, including cancer. While operating the “hospital,” Baker was being investigated by federal authorities and in 1939 was finally arrested for mail fraud. One US Postal Inspector estimated that Baker had made as much as $500,000 per year, selling his “miracle elixirs” through the mail while in Eureka Springs.

Baker was convicted to serve a four-year sentence in Leavenworth. The investigation revealed that over the years Baker had defrauded cancer patients out of approximately $4,000,000. While no one actually died from Baker’s “cure,” the investigation showed that his treatments most likely hastened the death of those suffering from cancer when they didn’t receive effective forms of treatment. In 1944, Baker was released from Leavenworth and moved to Florida, where he lived comfortably until his death in 1958.

During the wars years of 1940 to 1946, the beautiful building once again sat empty. However, in 1946, the hotel was purchased by four Chicago businessmen who began to restore the old hotel to its former elegance. Though never at the level of its first grand days in the late 1800s, the hotel once again began to thrive. Unfortunately, tragedy struck in 1967 when a fire swept through the fourth floor of the south wing and much it was destroyed. 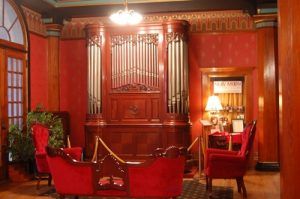 Inside the lobby of the Crescent Hotel.

Over the next several years, the hotel passed through several hands as repairs and more restorations were made, but the hotel was never fully restored to its original grandeur. However, this all changed in 1997 when the historic inn was purchased by Marty and Elise Roenigk. In May 1997, the couple announced, “In five Years, we pledge to have this ‘Grand Lady of The Ozarks’ back to where she was 100 years ago.” But, Ozark residents, having heard these promises too many times before, were skeptical.

In 1997, the Roenigks began to rebuild the spas. That first year, a 6,500 square foot “New Moon Spa” opened which included Vichy showers, a hydrotherapy tub, sauna, massage and therapy tables, tanning beds, and exercise equipment. The next major project was to restore the hotel’s skyline which had been destroyed in the 1967 fire. Costing well over a million dollars, the 3,500 square foot penthouse, original center observation tower, and the 200-pound, 24-foot-tall Crescent Moon weathervane were restored.

In the meantime, restorations of the guest rooms, lounges, electrical and plumbing, and landscaping were also going on. On September 6, 2002, The Roenigk’s bold announcement became a reality. After 5 million dollars in renovations, the grand hotel had been fully restored to its original stately glory.

4 thoughts on “The Haunted Crescent Hotel in Eureka Springs”