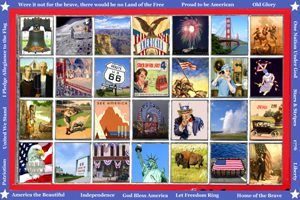 Americana on Auction with Barnebys (sponsored)

In the fabric of Americana, the lore of the people shall be defined by the people.

Materials concerning or characteristic of America, its civilization, or its culture; broadly: things typical of America.

1.  Often used with a plural verb – such as books, papers, maps, etc., relating to America, especially to its history, culture, and geography.

2.  Also used with a singular verb – such as  a collection of such materials.

The first Thanksgiving in 1621

From baseball to apple pie, Thanksgiving to cheeseburgers, Norman Rockwell paintings to a genre of American music having roots in early folk and country styles, Americana is all things American. More specifically, it is those values, traditions, cultures found within the melting pot of the United States.

Thinking “Americana”, many envision dancing the jitterbug or the twist to the likes of Elvis, Buddy Holly or Chuck Berry crooning on the jukebox; climbing in a classic Cadillac and making their way to the drive-in theater or grabbing a cheeseburger and fries from a car hop at a drive-in restaurant. Some envision baseball, hot dogs, and apple pie, while others think of patriotism, the Founding Fathers, and Old Glory.

“Americana”, first coined in 1841, might be used to describe artifacts, history, geography, folklore, music, literature, and more. It can refer to a collection, a design, a fashion style, home decor, food, art, literature, and even people.

Americana is an idea, or perhaps an “ideal”, which describes things closely associated with Americans, even if they are not unique to America and are also beloved in other countries. Often, these “things” are historical, bringing into focus the best of the “old days”. In the 1950’s — think poodle skirts, James Dean haircuts, Bebop music, sock hops, 3-D movies, and large tailfins on cars. Digging farther into the past, it might be swing dancing, flappers, bright red lipstick, hood ornaments, Betty Boop and Monopoly. More than a century ago it was the Wild West, pioneers, and cowboys.

The 1960’s brings to mind the space race, afros, banana seats, Barbie dolls, flower children, bell-bottoms, and go-go boots. The 1970s brings us disco, Starwars, daisy dukes, and streakers. And, it continues with the 1980s moving on to video games, MTV, yuppies, and more.

Americana, celebrating our unique American culture focuses on the best of the eras, the most romantic ideals, and the most fun ideas, with threads of nostalgia and patriotism embedded within.

Americana can be a state of mind, an idyllic description, or a celebration of tradition and culture. It is constantly evolving and varies widely from one person to the next. Most importantly, it represents optimism, love of country, and the American Dream. 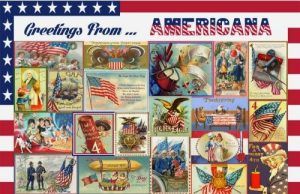 Home of the Brave

Land of the Free

Here in America we are descended in spirit from revolutionaries and rebels — men and women who dare to dissent from accepted doctrine.