By Carlton McCarthy in 1861 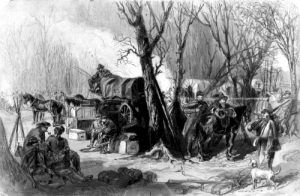 Regiment waiting the order to march

Orders to move! Where? When? What for? are the eager questions of the men as they begin their preparations to march. Generally, nobody can answer, and the journey is commenced in utter ignorance of where it is to end. But shrewd guesses are made, and scraps of information will be picked up on the way. The main thought must be to get ready to move. The orderly sergeant is shouting “Fall in!” and there is no time to lose. The probability is that before you get your blanket rolled up, find your frying pan, haversack, ax, etc., and fall in, the roll-call will be over, and some extra duty provided.

No wonder there is a bustle in the camp. Rapid decisions are to be made between the various conveniences which have accumulated, for some must be left.

One fellow picks up the skillet, holds it awhile, mentally determining how much it weighs, and what will be the weight of it after carrying it five miles, and reluctantly, with a half-ashamed, sly look drops it and takes his place in the ranks. Another having added to his store of blankets too, freely, now has to decide which of the two or three he will leave. The old water bucket looks large and heavy, but one stout-hearted, strong-armed man has taken it affectionately to his care.

Soldiers commonly threw away the most valuable articles they possessed. Blankets, overcoats, shoes, bread, and meat, — all gave way to the necessities of the march; and what one man threw away would frequently be the very article that another wanted and would immediately pick up; so there was not much lost after all.

The first hour or so of the march was generally quite orderly, the men preserving their places in ranks and marching in solid columns; but soon some lively fellow whistles an air, somebody else starts a song, the whole column breaks out with roars of laughter; route step takes the place of order, and the jolly singing, laughing, talking, and joking that follows no one could describe.

Troops on the march were generally so cheerful and gay that an outsider, looking on them as they marched, would hardly imagine how they suffered. In summertime, the dust, combined with the heat, caused great suffering. The nostrils of the men, filled with dust, became dry and feverish, and even the throat did not escape. The grit was felt between the teeth, and the eyes were rendered almost useless. There was dust in eyes, mouth, cars, and hair. The shoes were full of sand, and the dust penetrated the clothes. The heat was at times terrific, but the men became greatly accustomed to it and endured it with wonderful ease. Their heavy woolen clothes were a great annoyance; tough linen or cotton clothes would have been a great relief; indeed, there are many objections to woolen clothing for soldiers, even in winter.

Marching through the rain

If the dust and heat were not on hand to annoy, their very able substitutes were: mud, cold, rain, snow, hail, and wind took their places. Rain was the greatest discomfort a soldier could have; it was more uncomfortable than the severest cold with clear weather. Wet clothes, shoes and blankets; wet meat and bread; wet feet and wet ground; wet wood to burn, or rather not to burn; wet arms and ammunition; wet ground to sleep on, mud to wade through, swollen creeks to ford, muddy springs, and a thousand other discomforts attended the rain.

There was no comfort on a rainy day or night except in bed, — that is, under your blanket and oil-cloth. Cold winds, blowing the rain in the faces of the men, increased the discomfort. Mud was often so deep as to submerge the horses and mules, and at times it was necessary for one man or more to extricate another from the mud holes in the road.

Occasionally, when the column extended for a mile or more, and the road was one dense moving mass of men, a cheer would be heard away ahead — increasing in volume as it approached until there was one universal shout. Then some favorite general officer dashing by, followed by his staff, would explain the cause. At other times, the same cheering and enthusiasm would result from the passage down the column of some obscure and despised officer, who knew it was all a joke and looked mean and sheepish accordingly. But no man could produce more prolonged or hearty cheers than the old hare which jumped the fence and invited the column to a chase; and often it was said when the rolling shout arose: “There goes old General Lee or a Molly Cotton Tail!”

The most refreshing incidents of the march occurred when the column entered some clean and cozy village where the people loved the troops. Matron and maid vied with each other in their efforts to express their devotion to the defenders of their cause. Remembering with tearful eyes the absent soldier, brother or husband, they yet smiled through their tears, and with hearts and voices welcomed the coming of the road-stained troops. Their scanty larders poured out the last morsel, and their bravest words were spoken as the column moved by.

After all the march had more pleasure than pain. Chosen friends walked and talked and smoked together; the hills and valleys made themselves a panorama for the feasting of the soldier’s eyes ; a turnip path here and an onion patch there invited him to occasional refreshment; and it was sweet to think that camp was near at hand, and rest and the journey almost ended.

Notes and Author: This tale was written by a soldier named Carlton McCarthy and was included as a chapter in Albert Bushnell Hart’s book, The Romance of the Civil War, published in 1896 and now in the public domain.

Hardtack and Coffee in the Civil War